Would you believe me if I told you that this eggless vegan frittata, made in 15 minutes with chickpea flour, is just as good as a traditional frittata?

This vegan frittata is crisp on the outside, soft and moist on the inside, and for some reason, it feels like eating a regular egg frittata.

There are no eggs or tofu. Quick to make, it cooks for 8 minutes on a pan, or 18 minutes in the oven. Can be made with any vegetable of your choice.

We LOVE this vegan frittata. Frittata is an egg-based Italian dish that is similar to an open omelet. You can make it with all kinds of seasonal vegetables, such as zucchini, asparagus, artichokes, mushrooms, onions, and potatoes.

It can be served as a starter, side dish, and even for breakfast in a sandwich, but most often is made as a last-minute easy dinner.

Here I would like to invite you to try this plant-based alternative to the traditional frittata made with eggs.

It's a very simple and delicious dish that can be made in a few minutes. It tastes very similar to the real deal, but unlike the one with eggs, it's free of cholesterol and saturated fats, and it's packed with plant-based protein.

The main ingredient is chickpea flour, also known as garbanzo bean flour. I waited exactly 3 years before making it because I just didn't want to try chickpea flour.

Don't miss out as I did! I wouldn't want you to wait so long because this vegan chickpea frittata is truly magical!

For the frittata batter

This vegan frittata, just like egg frittata, can be flavored with any vegetables of your choice.

Here we show you a few classic Italian frittata fillings but feel free to pick your favorite veggies.

The most important thing is that you cook them and season them before adding them to the batter.

You'll need a non-stick pan to cook the frittata. Ours is 12 inches (28cm) in diameter. For best results, we also recommend using an immersion hand blender, or a regular blender, to mix the batter. If you don't have that, a whisk or a fork will do ok.

We show you three fillings: broccoli, mushrooms, and zucchini, but you can make it with any veggies. The important thing is to cook and season them first.

We will need about 250 grams or 9 ounces of broccoli. Cut the broccoli into small pieces, then steam them for about 15 to 20 minutes till soft but not mushy.

As a next step, season the broccoli with olive oil, salt, and pepper, mix and break up the larger pieces with a fork.

Then add the broccoli to the chickpea batter and give it a stir.

To a non-stick pan, add a drizzle of olive oil and a crushed clove of garlic. Let the garlic fry for a minute, then add 7 ounces or 200 grams of sliced mushrooms and 2 ounces or 60 grams of chopped kale to the pan.

Season with salt and pepper and cook for about 10 minutes. Then, make sure there's no vegetable cooking water in the pan, and add the mushrooms to the vegan frittata batter.

On a pan add ½ cup of water, a finely sliced onion, and sliced zucchini. Cook on medium heat until the zucchini is soft and the water is gone - it should take about 5 to 10 minutes. Season well with a pinch of salt and pepper.

Add the zucchini to the bowl with the chickpea batter and stir with a fork.

While your chosen vegetables cook, prep the batter for the frittata.

You can, of course, add a pinch of Kala Namak (black salt) to give it an eggy flavor, but that's not absolutely necessary.

Blend until you get a smooth, lump-free mixture. Then cook it either in a pan or in the oven.

How to cook vegan frittata in a pan?

To cook it in a pan, heat up a tablespoon of olive in a non-stick pan, then when the pan is very hot turn the heat down, and pour in the batter mixed with the vegetables.

I use a 28cm or 11 inches diameter pan here. Then arrange the vegetables a little bit all over the pan so that they don't just stay in the center.

Now let the frittata cook over medium-low heat for about 4 and a half minutes, without touching it.

Then before turning it over make sure it’s not sticking to the pan, then slide it onto a plate, and then turn it back into the pan and cook it for another two to three minutes at most, without letting it get too dry.

To turn it back into the pan, just put the pan upside down on top of the plate, then turn them at the same time. Watch our video linked below to see the technique.

This frittata is so simple and nutritious that we now make it at least twice a week, then, of course, you can change the vegetables depending on the season.

How to cook vegan frittata in the oven?

We really liked the oven-baked version too, it's still soft and moist and full of flavor, and perfect for a healthy breakfast.

But if you want to impress non-vegan friends and family we recommend cooking it on a non-stick pan, on the stove, with oil, as described in our recipe box.

Anyhow, here's how to cook this delicious vegan frittata without eggs in the oven:

What is a frittata?

Frittata is an egg-based Italian dish similar to an omelet with additional ingredients add it to it, such as seasonal vegetables. Frittata in Italian translates roughly as "fried dish".

What is the difference between frittata and omelet?

What kind of pan should I use for frittata?

Use a non-stick pan with a tablespoon of olive oil to cook the frittata. You'll get the best results this way.

Do you put cream in a frittata?

You can put cream in a frittata if you want to. In Italy some people do, some don't.

How to turn a frittata into a dinner?

This vegan frittata is best served as a complement to a big leafy green salad, and a piece of wholegrain bread. This way you'll get a delicious and nutritionally balanced meal.

Like egg frittata, our vegan frittata made with chickpea flour is the queen of variations. You can add pretty much anything you like to it.

Our tip is to always cook the ingredients and season them before adding them to the chickpea batter. Here are some examples of frittata variations that are really popular in Italy.

Clean and cut the end of the woody end of the asparagus, then cut each asparagus into 4 pieces, and cook them on a pan with half an onion and a drizzle of olive oil for 5 minutes. Season with salt and pepper, then add them to the chickpea frittata batter and proceed as instructed in the recipe box in step 4.

Finely slice the onion (julienne style), then cook it for 10 minutes on a pan with a drizzle of olive oil. When the pan gets too dry, add some water to it. Keep cooking till the onion is soft, season with salt and pepper and add it to the chickpea frittata batter and proceed as instructed in the recipe box in step 4.

Peel and dice the potatoes, then cook them in lightly salted boiling water till soft, but not mushy. It should take about 8 to 10 minutes. Now add the potato to the chickpea batter. Add in also a handful of finely chopped parsley. Season with salt and pepper and cook as described in the recipe box.

You've probably realized that we are big fans of frittata by now. It's a wonderful protein source for an easy dinner, and fun to use in vegan appetizers:

If you're new to cooking without eggs, take a peek at these easy egg-free recipes:

PSST! If dessert and sweets are your guilty pleasures, we feel you! Our egg-free plant-based desserts might also be of interest to you 🙂

Vegan frittata is best eaten minutes after it's made. If you have some leftovers, then store them in an air-tight container in the refrigerator for a couple of days max.

Then warm it up on a pan or in the microwave, but not for too long as you don't want it to get too dry.

If you have leftovers you can even freeze this chickpea frittata. Then when you are ready to eat it, let it thaw at room temperature for half an hour, then warm it up in the oven for a few minutes at 360F or 180C. 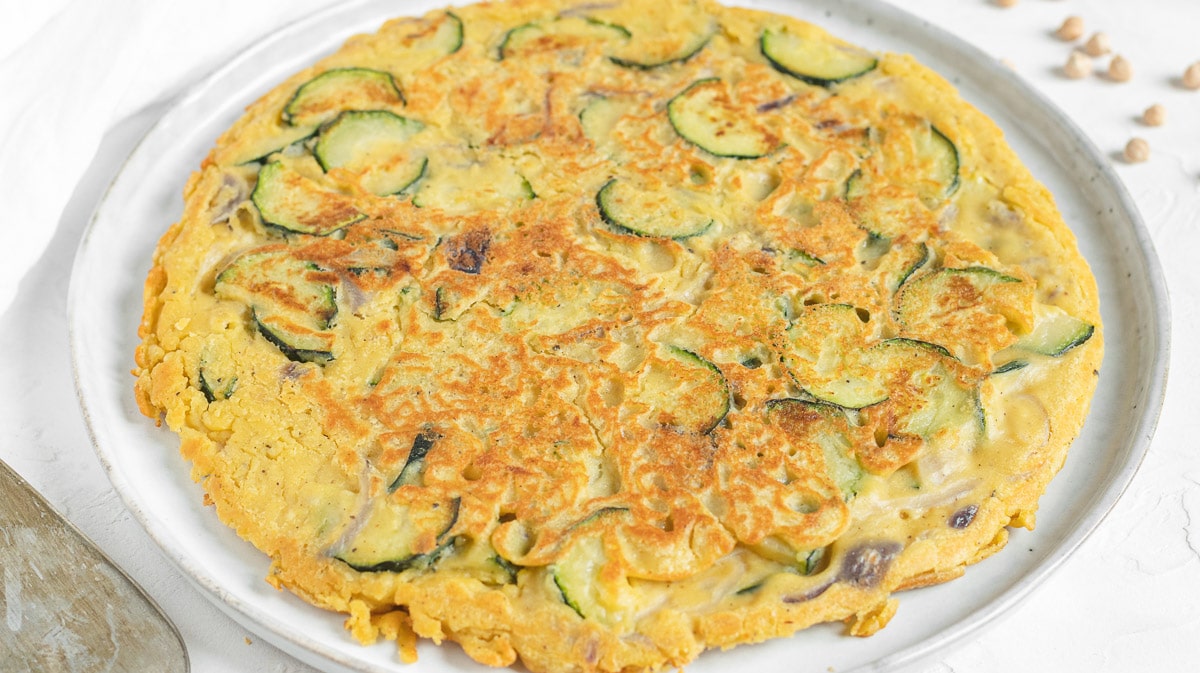 Vegan frittata - no eggs, no tofu

Author: Nico
Would you believe me if I told you that this eggless vegan frittata, made in 15 minutes with chickpea flour, is just as good as a traditional frittata? This vegan frittata is crisp on the outside, soft and moist on the inside, and for some reason, it feels like eating a regular egg frittata.
Print Recipe Pin Recipe Share Recipe
4.76 from 54 votes
Prep Time 5 mins
Cook Time 15 mins
Total Time 20 mins
Course Appetizer, Main Course, Snack
Cuisine Italian
Servings 4 people
Calories 211 kcal

For the frittata batter

For the zucchini filling

Chickpea Frittata with Mushrooms | no eggs, no tofu

Cut the broccoli into small florets, then steam it till soft. Season the broccoli with olive oil, salt and pepper. Give it a mix with a fork, breaking off the larger pieces of broccoli. Transfer the broccoli into the bowl with the batter, mix and cook the frittata as instructed in the steps above.

Slice the mushrooms and cook them on a non stick pan with oil, crushed garlic, salt pepper and optionally you could add some kale or spinach. It should take you about 10 minutes. Make sure there's no mushroom cooking water in the pan, then transfer the mushrooms to the bowl with the chickpea batter, mix and cook the frittata as instructed in the steps above.