Fennel and orange salad is a tasty, crunchy, and light fall and winter salad to be served as a side dish or as a starter for a weeknight dinner or a special holiday meal.

Fennel and orange salad is a simple but delicious winter salad that is very popular in Italy and especially Sicily, where oranges are sweet, juicy, and widely available throughout fall and winter.

You can make this simple salad recipe in a few minutes with easy-to-find ingredients. We think it's the perfect recipe for a delicate and refined starter or side dish for a special occasion.

There is, however, a simple trick to make this orange salad recipe exceptional: the orange must be peeled with a knife, and its flesh should be bare from the white membrane of the orange. But, no worries, I'll show you how to do that.

We like to add pomegranate seeds and black olives. They complement the orange and the fennel perfectly and add a pleasant taste and color to this beautiful dish.

Pick a large and fresh fennel bulb with plenty of fronds. The fronds are the green leafy ends of the fennels. They taste great and look pretty in the salad.

You can use a knife or a mandoline slicer to cut the fennel. Thinly sliced fennel adds a ton of crunch to this beautiful dish.

Juicy and ripe oranges, best if in season. You can use navel oranges, blood oranges or cara cara oranges.

We like lightly toasted pine nuts in this fennel and orange salad. You can substitute shaved or slivered almonds, chopped walnuts, and chopped pecans, all toasted lightly.

Pomegranate seeds add color and a sweet and acidic taste that goes well with fennel and orange.

We also like to add sliced black olives or kalamata olives for a light flavor boost.

We season this salad with a quick dressing made with the leftover juice from the oranges, extra virgin olive oil, salt, black pepper, maple syrup (optional), and Dijon mustard (optional).

Since we use orange juice leftover from the oranges, you won't need any other citrus juice like lemon juice or vinegar to make this orange vinaigrette.

Other ingredients that fit well in this salad are pears, arugula salad, chickpeas, and red onion. We show you a delicious pear, oranges, and fennel salad in the "variations" chapter below.

Wash the fennel, then cut off the stalks and the woody bottom part.

Separate the fronds (the green leafy part) from the stalks, chop them thinly and set them aside.

Cut the fennel in half, then cut each half again. You should have 4 pieces of fennel. Cut each piece of fennel into thin slices, then transfer them to a salad bowl.

Peel the orange with a knife. For best results, you should remove the white pith or membrane under the peel of the orange.

Then with a small sharp knife (paring knife), carve out orange wedges and add them to the bowl with the fennel.

Take the core of the orange you have left over, and squeeze it with your hands. Then, collect the orange juice into a bowl. We are going to use it to make the dressing.

If you have a whole pomegranate, cut it in half, then separate the seeds from the flesh.

The easiest way is to beat the pomegranate on its skin with a flat kitchen spatula and let the seeds fall into a bowl.

Add the pomegranate seeds to the bowl with the orange and fennel, then add sliced black olives and most of the chopped fennel fronds. Save some for garnishing.

Add the orange juice, olive oil, salt, pepper, and optionally Dijon mustard and maple syrup to a small jar. Close the jar and shake well until the ingredients are well combined.

You can also add the ingredients into a small bowl and whisk them together.

Add the orange dressing to the bowl, mix well with two spoons, then sprinkle with the remaining fennel fronds and some toasted pine nuts.

Tip: you can toast the pine nuts on a non-stick pan on low heat for a couple of minutes.

Pear salad with fennel and orange

Make this recipe even tastier by adding sliced pears and arugula.

Store the leftover salad in an airtight container in the refrigerator for up to 24 hours - the fresh fruit won't last much longer than a day. This recipe is not suitable for freezing.

If you liked this raw and refreshing fennel orange salad, you might also like these healthy salad ideas:

For many more salad ideas, check out our salads category page. 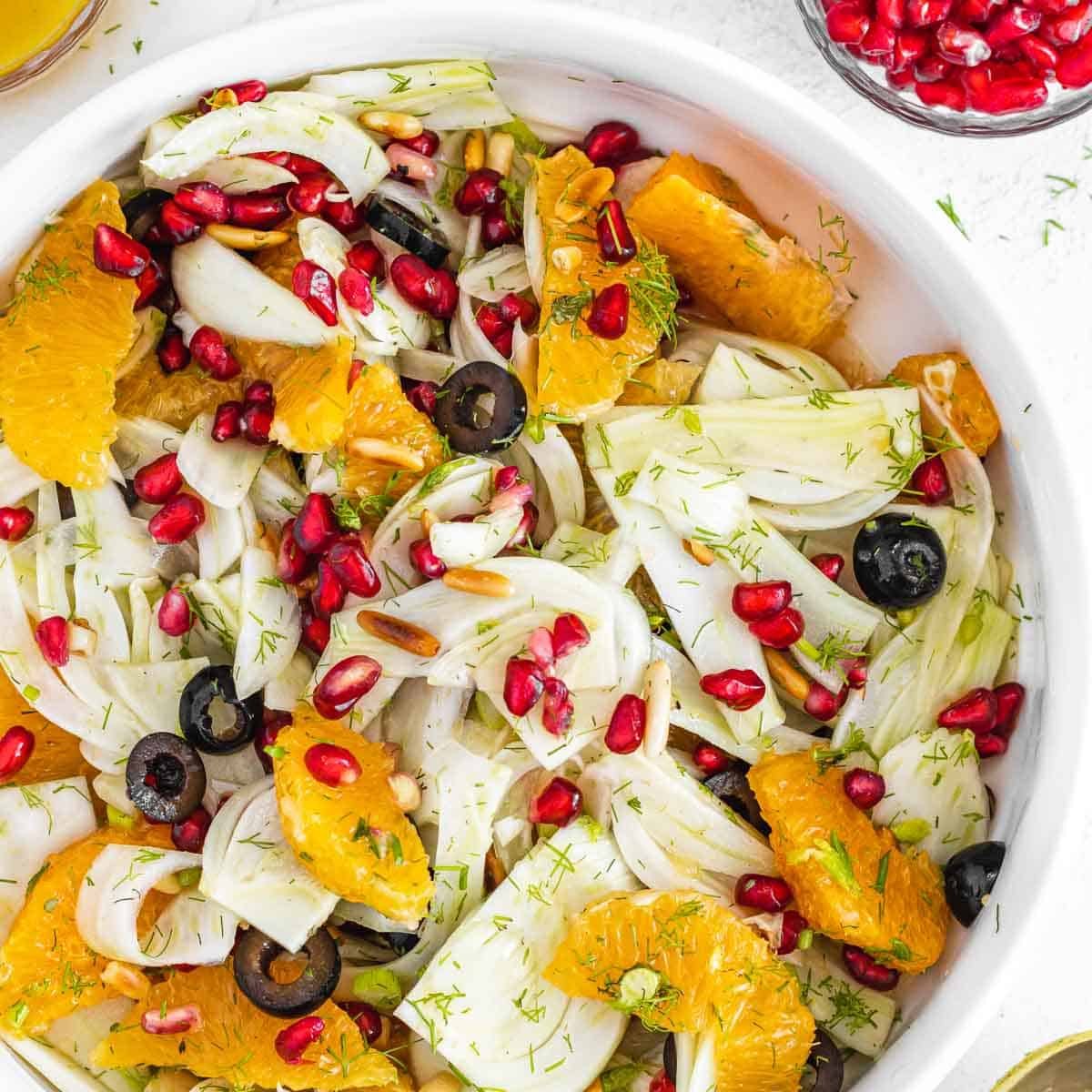 Author: Nico
Fennel and orange salad is a tasty, crunchy, and light fall and winter salad to be served as a side dish or as a starter for a weeknight dinner or a special holiday meal.
Print Recipe Pin Recipe Share Recipe
5 from 2 votes
Prep Time 15 mins
Cook Time 0 mins
Total Time 15 mins
Course Appetizer, Side dish
Cuisine Italian
Servings 4 people
Calories 198 kcal

Nutrition information is an estimate for 1 large serving of fennel and orange salad out of four.