Crostini are small slices of crunchy toasted bread you can eat as an appetizer or with soups and stews. Everyone loves crostini because they are tasty and fun to eat.

We'll show you how to make the best crostini at home and top them with some of the most delicious fresh homemade toppings.

Everyone loves crostini! Those little toasts made with sliced bread and various toppings are probably the most popular appetizer in the world.

In this blog post, we will show you how to make them in the oven from scratch in less than 10 minutes.

We will also give you plenty of ideas for crostini toppings. From olives to tomatoes, from garlic to mushrooms, we are sure you will find your favorite topping here.

Crostini comes from the word "crosta," which means "crust" in Italian, and the suffix "ini," which means little. So they are little crusts. Crostini is plural. The singular word is crostino, with an "o" at the end.

They were invented around the middle ages in Italy, where farmers would cut old bread into slices, toast it, and top it with whatever their garden had to offer. They would use the toasted bread instead of ceramic plates.

This tradition continued through the centuries, and nowadays, crostini are not only popular around Italy but anywhere in the world, from NYC to Cape Town. So let's see how to make them!

The best crostini bread is, in our opinion French Baguette or Italian ciabatta bread because it gets crunchy fast, it doesn't get too hard to bite, and it creates cute little toasts that are easy to eat.

Traditionally crostini are made with one to two days old stale bread, but you can also make them with fresh bread.

You can also use whole wheat bread or rye bread. We did this for our butternut squash soup, and it was delicious.

Extra virgin olive oil is the oil of choice for most Italian recipes. It's heart-healthy, rich in antioxidants, and gives the bread a light aromatic flavor with earthy notes.

See the dedicated "crostini toppings" chapter below for a complete list of toppings.

You can top them with anything you like, from veggies to cheese to meats. For example, some people make crostini with goat cheese, feta, brie, salmon, shrimp, and even bacon.

But while creamy goat cheese crostini are undoubtedly good, here we'll show you how to make tasty and healthy toppings with almost any vegetable.

Preheat the oven to 450°F or 230°C. Line a baking sheet with parchment paper.

Brush each slice with extra virgin olive oil on both sides. To reduce oil, brush one side only.

Arrange the slices on the baking sheet without overlapping.

Bake at 450°F or 230°C for 7 minutes until crispy and golden. We like to bake our crostini only on one side because they get crunchy but not too hard.

If you like them crunchier, turn them around and bake for another 5 minutes. Keep in mind that they'll get dryer as they cool down.

Sprinkle with salt and pepper, and serve as is, with some brushed garlic on top, or with your favorite topping.

These are just some ideas we gathered while traveling and living in Italy.

Crostini are very popular in the region Nico is from, and you always have a choice of "crostini misti" (mixed crostini platter) on the menu in the local restaurant.

A classic! Chop some ripe grape or cherry tomatoes into small dice and mix them with olive oil, minced garlic, salt, pepper, and a dash of balsamic vinegar. Thyme and oregano are also really good in this mix as alternative herbs to basil.

Stir and let sit for about 15 minutes at room temperature before using it as a topping.

You can make this with leafy greens, including spinach, kale, and chard.

Boil the chard until soft, drain it, let it cool down, then squeeze it with your hands to get rid of most of the water. Next, transfer it onto a pan with olive oil and garlic, sautée for a few minutes, and season with salt and red pepper flakes. Arrange on top of the bread.

This is an Italian version of garlic bread. As soon as the crostini are out of the oven, brush them with a clove of garlic. The warm crusty bread absorbs the garlic allowing its aroma to penetrate it.

Then season with salt, pepper, and some good-quality extra virgin olive oil before serving.

Cut about ½ pound or 250 grams of mushrooms into small dice. Next, warm up two tablespoons of olive oil on a pan, add a crushed clove of garlic, let fry for a minute, then add the mushrooms.

Season with salt and pepper, and cook for about 10 minutes, stirring occasionally. Turn the heat off and add a handful of finely chopped parsley. Stir and arrange on top of the toasted bread.

You can use Italian ricotta cheese, or if you'd like a dairy-free and vegan alternative, you can try our vegan ricotta or tofu cream cheese.

Spread a generous layer of ricotta onto the toasted bread. Top with thinly sliced pear (apple works, too), a piece of walnut, and a drizzle of honey or maple syrup.

You can also top with sun-dried tomatoes and olive oil. Or strawberry and balsamic glaze.

Use classic Italian pesto, or pick one pesto from our list of amazing vegan pestos. They are all easy to make and delicious.

Spread on top of the bread and top with some fresh basil and toasted pine nuts on top.

Tapenade is a flavorful condiment made with chopped olives and capers. Check out how to make our homemade tapenade.

Confit tomatoes are probably the most indulgent way of eating tomatoes. They are juicy and bursting with flavor.

We slow-cook them in the oven to get them soft and melty. Here's the recipe for our tomato confit. We used our tofu cream cheese as a spread.

Steam half of a broccoli head, transfer it to a bowl, and add one or two tablespoons of olive oil, salt, pepper, and a squeeze of lemon juice.

Mash it with a fork, then spread it on top of the crunchy bread. Delicious!

Another excellent Italian starter, roasted bell peppers are meaty yet soft and packed with flavor.

We season them with olive oil, garlic, and basil or mint. Arrange a few slices on top of the toasted bread for a delicious homemade appetizer. Here's the full recipe for our roasted bell peppers.

A quick and easy way to cook zucchini, and probably the most versatile, sautéed zucchini is perfect on top of crunchy bread.

Add a few slices, then sprinkle with some fresh chopped parsley and a twist of black pepper. Here's our recipe for sautéed zucchini.

Crostoni are simply a larger version of crostini. They are perfect as a base for our melty vegan cheese.

All you have to do is spread a generous amount of our homemade vegan cheese (or any other melty cheese) on top of the toasted bread, then put it back in the oven, with the broiler function on, and broil for a couple of minutes until the cheese gets toasty and bubbly. Then, drizzle with olive oil and a pinch of salt, and enjoy.

After making air fryer croutons, we thought, why not make crostini in the air fryer too. It works wonderfully.

Preheat the air fryer to 390°F or 200°C for 3 minutes. In the meantime, slice the bread and brush it with olive oil on one side. Arrange the bread in the air fryer basket. The slices CAN overlap a bit. Air fry for 4 to 5 minutes, depending on how crusty you want them.

You can make air fryer crostini completely oil-free if you like. We sometimes do that when we want to have a lighter dinner.

You can enjoy crostini with different meals: next to salads for lunch, and as a side with your dinner. Check out these ideas for inspiration:

Whether you're getting ready for game night or pampering friends and family, here are some of our favorite starters:

What is the difference between bruschetta and crostini?

In general crostini are smaller than bruschetta and crostoni. Also, crostini are brushed with oil before toasting them. Bruschetta is toasted without oil and drizzled with it after it's toasted.

Crostini can be made with most bread varieties, including French baguette, sandwich bread, and other white bread. Bruschetta on the other hand can only be made with rustic Italian bread (pane casereccio, pane sciapo, pane toscano o umbro).

In practice, however, crostini, crostoni, and bruschetta are very similar. They are all toasted slices of bread with toppings, and in some Italian regions, the names are used interchangeably.


Why are my crostini so hard?

Your crostini are hard because you baked them too long. Reduce baking time, and your crostini will be less hard.

Can I make crostini in advance?

You should bake crostini at the last minute, just before serving. However, you can make the toppings up to 3 days in advance and store them in an airtight container in the refrigerator.

Store crostini without the toppings in an airtight container for a few days at room temperature. Don't store them in the refrigerator.

Crostini will get dryer and harder as the days go by. Crostini with toppings can only be stored for 12 to 24 hours, depending on the topping.

You can store the toppings separately in the fridge for 3 to 4 days. We do not recommend freezing crostini. 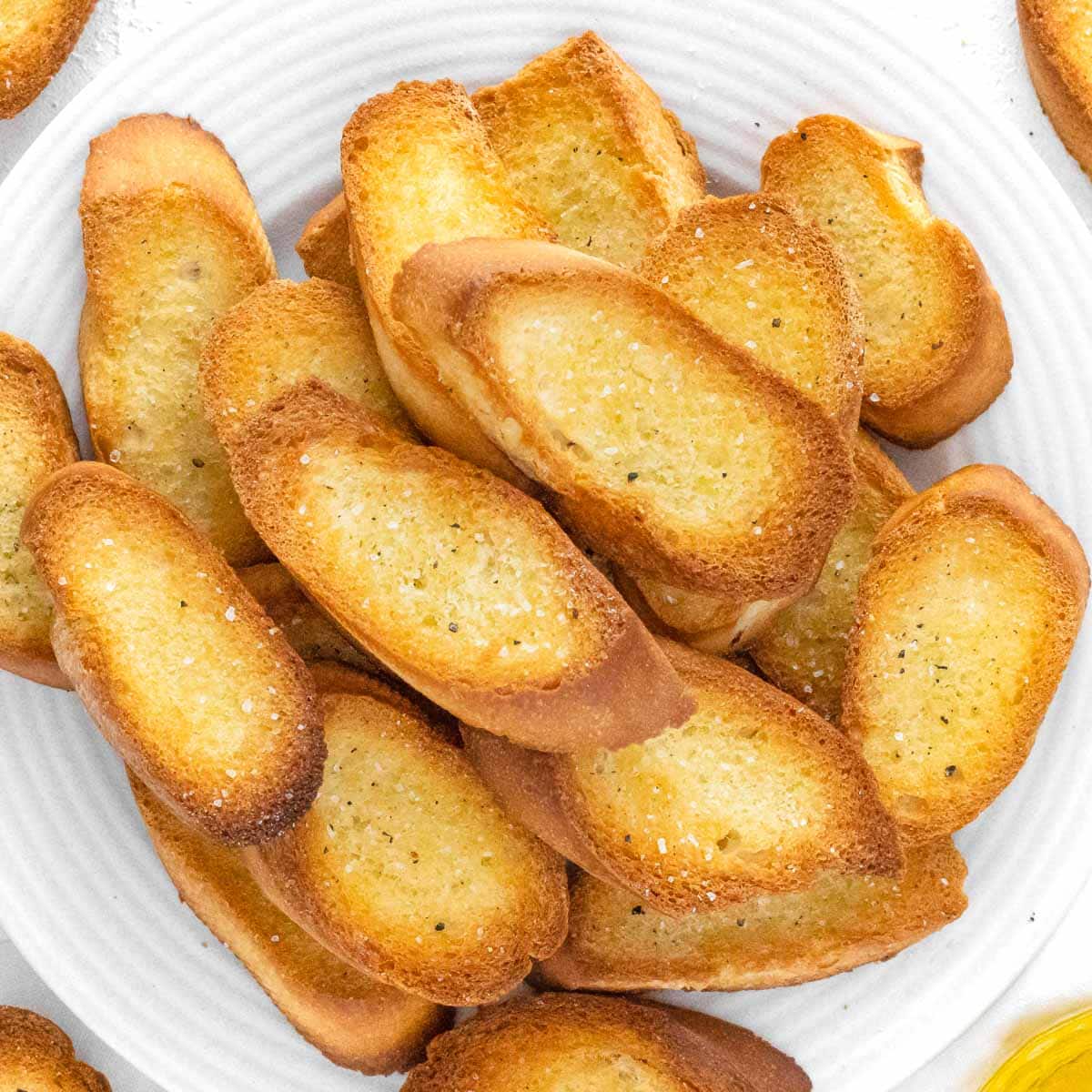 See the dedicated "crostini toppings" chapter above the recipe box for a complete list of toppings.
Nutrition information is an estimate for four crostini without toppings.