This vegan schnitzel is inspired by Italian "Cotoletta alla Milanese" and it's meaty, crisp, aromatic, and made with our healthy vegan meat cutlets to get to a flavour and texture that is as delicious as the one of real meat.

This recipe is simple, but you'll need a bit of time if you need to make the vegan cutlets from scratch. We use our homemade vegan cutlets as a meat replacement and use a mix of Italian herbs to flavor the vegan breading

Vegan meat cutlets: you will need to make these beforehand to cook this vegan schnitzel.

Don't worry, the procedure is easy, and you can follow our step-by-step instructions here --> "How to make vegan meat cutlets".

Just make sure you do it a day or so in advance as the vegan cutlets need some time in the refrigerator before you can cook them.

Bread crumbs: you can either blend some stale bread in your high-speed blender or purchase some pre-made bread crumbs.

Plant milk: pick your favorite unflavoured and unsweetened plant milk. We use soy milk here but you can substitute it with oat milk, pea protein milk, rice milk, etc. as long as they are unsweetened and unflavoured.

Spice mix: we use garlic powder, sea salt, black pepper, thyme and rosemary. It's a simple mix that recalls Italian flavors. Feel free to change it up and add your favorite spices.

Oil for frying: get an oil that is specifically developed for deep frying so that it can withstand high temperatures.

Our take on fried foods

What is important for us to make clear is that frying and deep frying are not healthy ways of cooking food. While we love to eat foods that are deep-fried, we only do so in moderation, on special occasions.

On a day-to-day basis, we eat a whole-foods plant-based diet that is rich in raw fruits and vegetables, legumes, and whole grains, and poor in refined foods like oils and sugar.

However, we believe that eaten in moderation and as part of a plant-rich diet full of raw vegetables and fruit, vegan fried foods like this schnitzel are good for your soul and can be helpful for people that are trying to eat less meat and more vegan.

To keep in mind when frying

1) NEVER heat up the oil to more than 180°C / 356°F as the oil will become unstable and will burn, creating toxic compounds. That is why we always recommend using a kitchen thermometer to constantly check the temperature of the oil.

2) NEVER reuse oil more than once, as reheating the oil might make it more unstable.

3) Eat deep-fried foods in moderation and only as part of a diet that is plant-based, with plenty of raw fruits and vegetables rich in antioxidants that are able to offset, at least in part, the harmful effects of oils.

Pick the right oil for frying

Choosing the right oil is probably the hardest thing in the cooking world when it comes to frying. Different websites pick different oils as the best, and we at the plant-based school couldn't come down with the best oil for frying.

Scientific research shows that extra virgin olive oil is one of the best oils for deep frying food as it is quite stable thanks to its high amounts of antioxidants, while coconut oil is the worst. Canola oil is also a good choice, but we really don't like its flavour so we never use it.

When we fry we either use extra virgin olive oil (which despite its lower smoking point is quite a stable oil, rich in antioxidants) or generic frying oil (which is less nutritionally healthy than olive oil, but has a high smoking point and it is cheaper). We never reuse the oils.

Deep-fry at the right temperature

If the oil temperature is too low, the food will absorb the oil, it will have a lot more calories when you eat it, and it will not be as crispy and tasty.

If the oil temperature is too high, the oil will burn, creating toxic particles that end up in your food and will, in the long term, make you ill. Also, at high temperature, the oil will taste burnt and the food will turn out dry.

WHAT IS VEGAN SCHNITZEL MADE OF?

In our opinion, the best vegan schnitzels are made from vital wheat gluten using a technique that is thousands of years old and has been developed to create fake meats that have a texture and flavor that are very similar to real meat. This way of making fake meats has originated in Asia. We adapted this technique to western flavors and developed our own recipe for fake meat cutlets.

WHERE IS SCHNITZEL FROM?

WHAT IS SCHNITZEL IN ITALIAN?

Schnitzel is widely known in Italy as "cotoletta" or "costoletta". The Italian counterpart of Wiener Schnitzel is "Cotoletta alla Milanese".

HOW DO YOU KEEP SCHNITZEL CRISPY?

To keep the Schnitzel crispy you need to first coat it in a batter made with soy milk and flour, then coat it in bread crumbs, and then deep-frying it in vegetable oil that is at the right temperature of 180C / 356F. 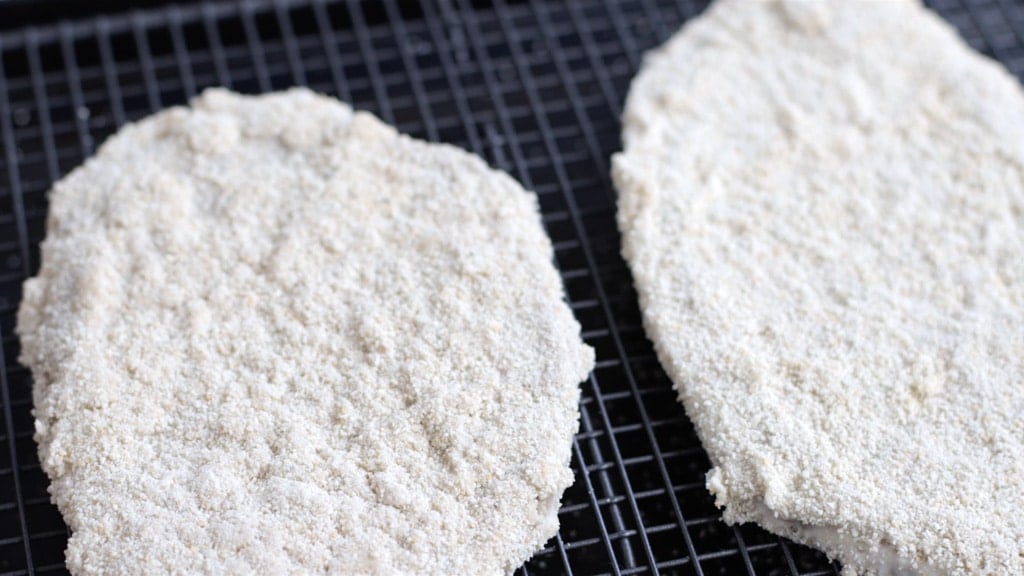 WHAT CAN YOU USE INSTEAD OF EGG TO BREAD A SCHNITZEL?

You can replace eggs with a batter made of soy milk and flour. You can add all sorts of spices to the batter to make it extra delicious.

WHAT IS THE BEST OIL TO FRY SCHNITZEL?

We believe that the best oil to fry our vegan schnitzel is generic vegetable oil because it is neutral in taste and because it has a high smoking point.

IS IT HEALTHY TO FRY WITH OLIVE OIL?

Frying and deep frying are not healthy ways of cooking food. However, we believe that eaten in moderation and as part of a plant-rich diet full of raw vegetables and fruit, these foods are good for your soul. Extra virgin olive oil is one of the best oils for deep frying food as is quite stable thanks to its high amounts of antioxidants.

WHAT TEMPERATURE DO YOU FRY THE SCHNITZEL IN?

If you feel like eating meat but don't want to eat deep-fried food, we have two delicious Italian meat recipes that are made with the same vegan meat cutlets as the base:

This vegan schnitzel is best when enjoyed with condiments and greens, here are our favorites:

Vegan schnitzel is only good when eaten straight out of the frying pan and cannot be stored or reheated.

You can however store the homemade vegan meat cutlets (before cooking them in the lemon sauce) in a container in their own cooking broth and in the refrigerator for up to 1 week. This is the best way to have a quick dinner almost ready during the week. 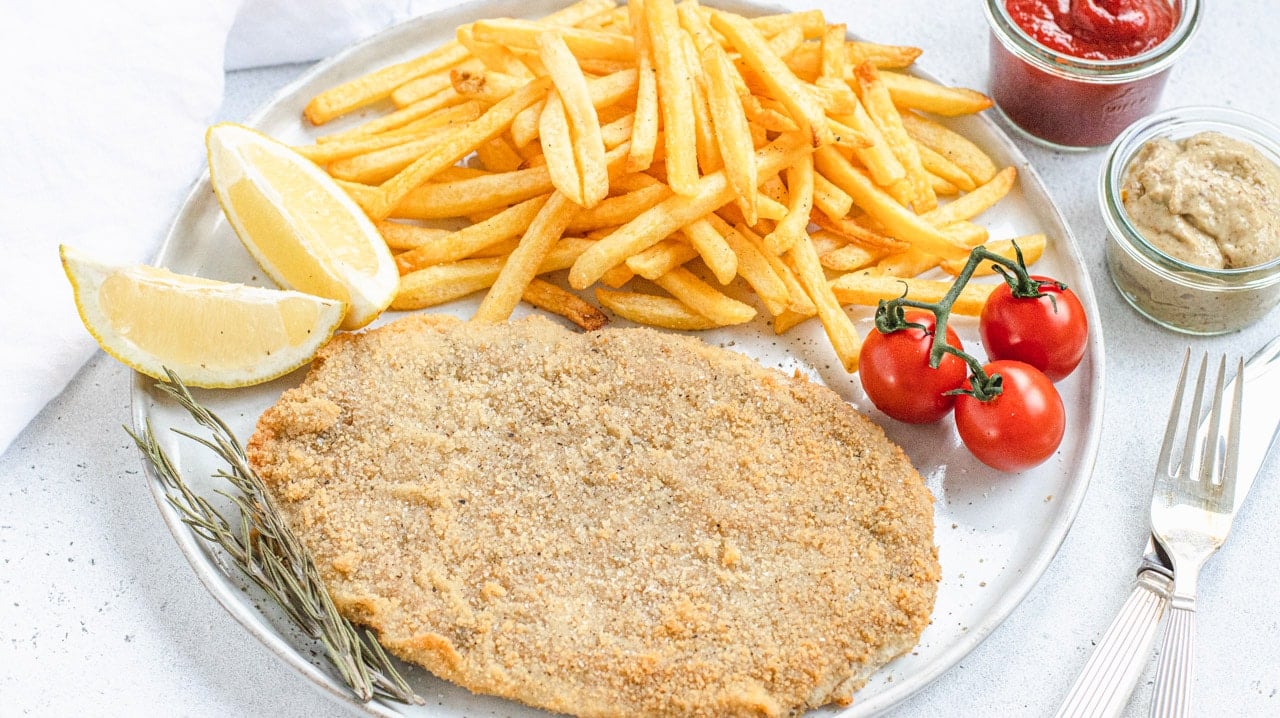 Author: Nico
This vegan schnitzel is inspired by Italian "Cotoletta alla Milanese" and it's meaty, crisp, aromatic, and made with our healthy vegan meat cutlets to get to a flavour and texture that is as delicious as the one of real meat. This recipe is simple, but you'll need a bit of time if you need to make the vegan cutlets from scratch. We use our homemade vegan cutlets as a meat replacement and use a mix of Italian herbs to flavour the vegan breading.
Print Recipe Pin Recipe Share Recipe
5 from 1 vote
Prep Time 15 mins
Cook Time 15 mins
Course Main Course
Cuisine Italian
Servings 4 people
Calories 589 kcal

For the vegan breading

NOTE: Here's is our recipe for the meat base "Homemade Vegan Meat Cutlets". Ideally you should make these cutlets between 1 day to 6 days in advance so that they have enough time to rest and build a good meaty texture. Please take this into account when cooking this recipe.

Did you try this recipe at home? Let us know in the comments below, or take a picture and tag us on Instagram @italiaplantbased.