Our vegan cinnamon rolls are easy to make, lightly toasted on the outside, soft and moist on the inside, and with a tad of caramelized sugar underneath.

The frosting goes between all the layers of the roll, all the way down to the bottom. When you taste them, they are super fluffy, slightly gooey, and then melt in your mouth.

And for the most health-conscious of you out there, we even made a version without any added refined sugar.

For a healthier filling, you can replace the sugar and the vegan butter with date paste. Date paste will add enough sweetness and moistness to the rolls.

Optionally you could add a couple of tablespoons of vegan cream cheese. In this case, to adjust the consistency, also add a little more plant milk.

How to make vegan cinnamon rolls

Mix with a whisk and let the yeast sit there for 1 minute.

In the meantime, prepare the fat component, which can be a neutral vegetable oil, such as sunflower oil, or melted vegan butter.

In this case, I chose vegan butter with no palm oil and no hydrogenated fats. Mine has a 50% fat component but up to 80% is fine.

Melt it in a saucepan, then make sure that it is lukewarm and not hot, and add it to the bowl with the liquids.

Give it another stir then add flour and salt.

Mix with a wooden spoon or a silicone spatula until you get a dough ball that you can then transfer to a lightly floured work surface.

Knead vigorously for at least 5 minutes, and until the dough is elastic and smooth. It may take up to 10 minutes.

If you want, you can also use a standing mixer to knead the dough.

The dough should be as soft as possible without sticking to your hands. So try not to add more flour. In the case of brioche dough, the wetter the better.

As always in doughs, however, doses of flour and water may change slightly according to the type of flour you use, how old the flour is, or even according to altitude, temperature, and humidity of your kitchen.

So if it really sticks to your hands, add a sprinkling of flour at a time, always remembering that a soft and moist brioche dough is preferable to a hard and dry one.

Now put the dough to rise in a large bowl that is well oiled. I use the same bowl as before. Then cover the dough with a damp cloth or a lightly oiled plate and put it on top of the bowl upside down.

For proofing, my advice, especially in the winter, is to let the dough rise in a warm oven, that is, turned on for 30-40 seconds, then turned off and kept with the light on.

In this way we will create the optimal conditions for leavening, that is a temperature around 30 C or 85F and a draft-free environment.

Let the dough rise for about one hour, one hour and a half until it has doubled in size.

While the dough is rising, let's prepare the filling for the cinnamon rolls.

In a bowl, put softened vegan butter, sugar, and cinnamon.

Incorporate with a fork until the ingredients are well mixed together, then put in a cool place, and if you see that the vegan butter melts too much, you can also put it in the fridge to keep the mixture with a consistency that is not too liquid, and that is easy to spread.

At this point, the dough should be double in size, transfer to a work surface trying not to add flour, or at least add a little flour at a time if necessary.

Fold the dough over 5 or 6 times, then roll it up into a ball by using the edges of your hands.

These two movements will give structure to our dough and it will also make it easier to shape the cinnamon rolls.

Now dust the work surface with a dusting of flour, and begin to roll out the dough, first with your hands, then with the help of a rolling pin, trying to make a rectangle of about 12 x 16 inches or 30 x 40 cm.

Make the corners as square as possible.

Now spread the filling on it. You can spread it with a spoon, or even better with a silicone spatula. Spread it all over the rectangle leaving just a quarter of an inch at the edges.

Now roll the dough on itself. My advice is to start from the shorter side, trying to form a nice compact roll.

Before cutting the roll, choose a shape to bake it. I prefer square shapes, but a round pan is fine too.

We used a 10 inch by 10 inches (25cm by 25cm) square baking pan. Grease it well with vegan butter, then you are ready to cut the roll.

Take a piece of dental floss, wrap it around the roll, and tighten it as if you wanted to tie a knot.

This way the roll will be cut evenly maintaining a round shape.

Alternatively, you can use a bread knife, but the rolls will squish a bit at the base.

Here I cut each roll to a thickness of just over an inch (3 centimeters). Then transfer each roll to the baking sheet. This 10 x 10 inches (25 x 25 cm) square pan will fit 9 rolls at most.

Don't worry if they aren't perfect, they look better if they are a little different from each other.

Then if we have some leftovers we can place them on another baking sheet and leave them in the fridge to be baked the next day, or we can even freeze them to be baked later.

Once the vegan cinnamon rolls are arranged on the baking sheet let them proof for another 40 minutes before baking them.

Preheat the oven to 350F or 180C and in the meantime brush the rolls with a little bit of plant milk. Then when the oven is hot bake them for about 20 - 25 minutes.

One important thing: if you use a low-sided pan like this one here, then the cinnamon rolls will bake in about 20 minutes. If you use a high-sided pan the rolls will take around 25 minutes.

At this point, with the house filled with the scent of brioche and cinnamon, we can take the cinnamon rolls out of the oven and let them cool for 15 minutes before devouring them.

To go all-in we serve them with an easy vanilla frosting, which in my opinion is mandatory to have a complete experience.

To make the frosting, we mix together powdered sugar, plant milk, and vanilla extract.

If you want you can also add a few spoonfuls of vegan cream cheese. In this case, adjust by adding a little more milk.

That's it, after 15 minutes we can serve them, leaving the glaze aside at the discretion of your guests.

These cinnamon rolls are fluffy, slightly toasted on the edges, and super soft inside, with the sugar and cinnamon melted and slightly caramelized underneath.

Then the frosting goes between all the layers of the roll, all the way down to the bottom. When you taste them, they are super fluffy, slightly gooey, and then melt in your mouth.

Eating something like this is truly an almost transcendental experience at least for me especially when I think that these cinnamon rolls are 100% plant-based.

Here at The Plantbased School, we believe that these recipes are important for special occasions, for partying, for letting loose, and not being too hard on yourself.

But we also want to emphasize that in everyday life we believe in eating healthy, with less sugar, and with foods a little less refined.

So in order to enjoy these cinnamon rolls a little more often, we made a light version, without added sugars.

All you need to do is replace the sugar in the dough with equal amounts of date paste.

Then add the flour and salt and continue as described above.

Easy right? Thanks to the smooth and spreadable texture, and the very sweet flavor, date paste is particularly suitable for the filling of our cinnamon rolls as well and will replace vegan butter and sugar in one fell swoop.

So the only thing you need to do for the filling of these sugar-free cinnamon rolls is to mix date paste and cinnamon together and your filling is ready. Continue the recipe as described previously.

These also turned out super cute, nice and tall, and super fluffy. Since we're eating these without frosting on top, we immediately brush them with a little water to keep them soft longer. These are perfect for breakfast or as a snack.

And despite the fact that there are no refined sugars, these vegan cinnamon rolls are perfectly sweet and soft.

If you don't eat your vegan cinnamon rolls right away then I recommend storing them in plastic bags, airtight so they don't dry out too much.

You can also freeze the cinnamon rolls. To do so, after cutting them, put them on a tray, wrap them with film and freeze them before the second proofing.

Let thaw in the refrigerator before cooking them in a preheated oven at 350F or 180C for 20-25 minutes. 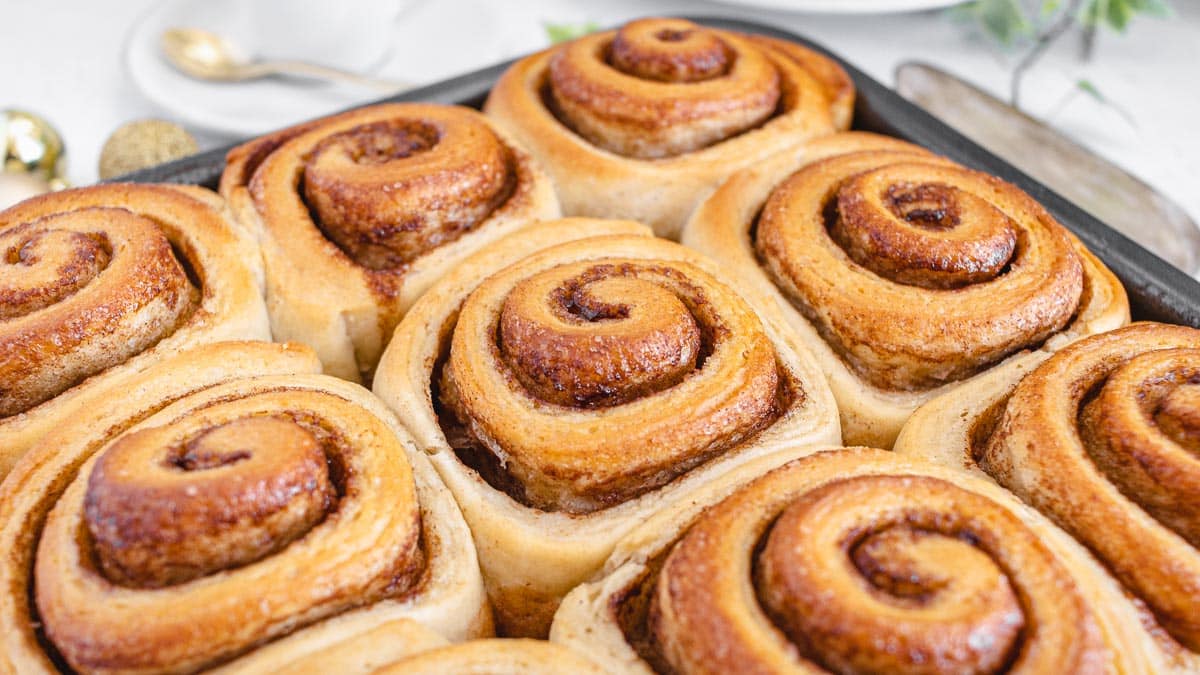 Author: Nico
Our vegan cinnamon rolls are easy to make, lightly toasted on the outside, soft and moist on the inside, and with a tad of caramelized sugar underneath. Then the frosting goes between all the layers of the roll, all the way down to the bottom. When you taste them, they are super fluffy, slightly gooey, and then melt in your mouth.
Print Recipe Pin Recipe Share Recipe
5 from 7 votes
Prep Time 30 mins
Proofing 2 hrs
Total Time 2 hrs 30 mins
Course Breakfast, Dessert
Cuisine American
Servings 9 rolls
Calories 300 kcal