Penne all'arrabbiata has its origin in the Rieti province, in Lazio, not far from Rome. Together with spaghetti aglio e olio and pasta cacio e pepe, penne all'arrabbiata is one of the most popular pasta dishes of Italy. It's simple, yet delicious, and naturally vegan, made only with a few healthy ingredients.

For other delicious vegan Italian pasta recipes, check out our:

What does arrabbiata mean?

Arrabbiata means angry. Due to chili peppers, eating the pasta will make your face red, like if you were angry. Hence the name arrabbiata.

What is the difference between arrabbiata and marinara?

You could say that arrabbiata is a spicy version of marinara. However, in Italy usually marinara is used on pizza, and rarely on pasta, whereas arrabbiata is only used on pasta, and never on pizza.

The ingredients, however, are the same, with the addition of the chili pepper and the parsley in the arrabbiata.

Penne all'arrabbiata is best eaten on the spot. If you have some leftover, store it in a air tight container in the refrigerator for up to 12 hours.

To reheat it, add it to a small pot with a dash of tap water and warm it up on medium-low heat. Sprinkle with some fresh parsley. Do not reheat more than once. 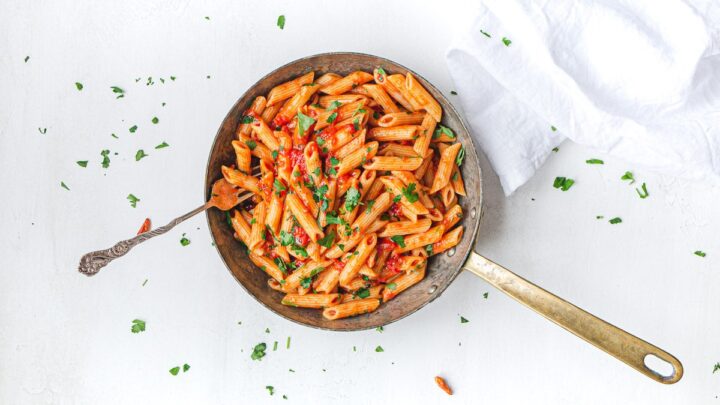 Did you try this recipe at home? Let us know in the comments below, or take a picture and tag us on Instagram @italiaplantbased.

Ciao, I am Chef Nico, recipe developer and instructor here at The Plant-Based School, a project with the purpose to make cooking with plant-based ingredients easy and accessible to everyone.

Omnivores, paleo, vegetarians, and vegans, you are ALL WELCOME to this community.