This homemade vegan Italian cannoli recipe will take you straight to Sicily, the motherland of authentic cannoli siciliani.

Our filling is made of vegan homemade ricotta and is sweet and creamy. The shell is every bit as bubbly, light, and crisp as the traditional ones, but without eggs, lard, or butter.

Our vegan cannoli will not disappoint. We promise. This recipe has been perfected over time to recreate the flavor and texture of authentic Sicilian cannoli.

We make the filling with our homemade soy ricotta, which is very easy to make with 3 ingredients. The ricotta flavor is neutral and mild, perfect to be used as a filling for cannoli.

The cannoli shells are also very simple and turn out crunchy and bubbly, and practically exactly like original cannoli shells. If you decide to make this recipe, you are in for a real treat.

Ingredients for the vegan ricotta

Ingredients for the vegan cannoli filling

Ingredients for the vegan cannoli shell

Ingredients for the cannoli toppings

For this cannoli recipe, we start by making a simple dough. To do that, add flour, sugar, cacao powder, and cinnamon to a bowl and mix well with a spatula. Now add softened vegan butter (or margarine), the marsala wine (or sweet red wine), and the water. Mix with a spatula till you have a dough ball.

Then, on a worktop, knead the dough ball for about 5 minutes. You should have a smooth dough ball, with a soft consistency, but not sticky. If it's too wet and sticky, add some flour to the worktop and keep kneading until it doesn't stick to your hands.

Now you can let it rest in a bowl, covered with a plate, for 30 minutes. TIP: when resting, the gluten in the dough relaxes, making it easier for you to roll, and lighter to eat.

After 30 minutes of resting, you can start rolling the dough with a rolling pin. Dust the worktop and the rolling pin with flour to prevent the dough from sticking.

While rolling, fold the dough on itself 5 to 10 times before flattening it completely. This will make the cannoli shell lighter and full of little bubbles. You should aim for a thin dough, of about 1 to 2 millimeters.

Before you start frying, remember that hot oil and water should never come into contact. So please be careful. Now, add the frying oil to a pot. Don't fill the pot with oil completely, only half. The pot should be small, but big enough to comfortably fit one cannoli plus the frying oil.

Bring the oil to temperature. It should reach 180°C (360°F). The best way to check if the oil has reached temperature is with a thermometer. If you don't have one, dip the tip of a wooden spoon in the oil. When it starts to bubble, the oil is ready. If the oil smokes, it means it is too hot, and it's burning. That's not healthy.

Now you can fry the cannoli, one by one. It takes about 1 minute for each cannolo. Turn them around while frying so that they cook evenly.

TIP: if you see that the cannoli break away from the forms while frying, then give the next ones a squeeze with your hands to tighten them up around the forms, before dipping them in the frying oil.

When the cannoli turn light brown, take them out of the oil, let drip the excess oil, and place them on a cooling rack on some kitchen paper. They'll darken when cooling.

When cooled, gently remove the forms and get ready to fill up the cannoli shells. Only fill up the shells once they are completely cooled.

In a bowl, add the vegan ricotta, sugar, vegan dark chocolate drops, and a tiny bit of orange zest. Use a spatula to gently mix. Do not over-mix.

Put the ricotta cream into a pastry piping bag and start filling the cannoli one by one. Fill each cannolo from both sides, starting from the middle and moving outwards, while filling.

Dip one end of the cannoli into some crushed pistachios, and top the other end with candied orange peel or half a candied cherry.

Arrange on a serving platter, sprinkle with powder sugar and enjoy.TIP: Use the leftover dough to make some cannoli nachos. Flatten it, then cut it into triangles, fry it, and serve it with a side of cannoli filling dip. See our variations section.

What is cannoli filling made of?

What can I use instead of cannoli tubes?

You can use bamboo canes or rolled-up aluminum foil, wrapped in parchment paper.

Can you make cannoli without lard?

Yes. You can make vegan Italian cannoli without lard as we do in our recipe. Just use margarine, vegan butter, or regular vegetable oil like sunflower seed oil.

Can you make cannoli without wine?

Yes. You can replace wine with half water, half vinegar. We recommend adding either wine or vinegar to make your cannoli shells bubble, just like the authentic Sicilian cannoli recipe.

PSST! If you're also a big fan of vegan Italian recipes, we hear you! If we missed one of your favorite Italian recipes on our site, let us know in the comments below. Comments and ratings help us improve our content, so leave us a note below if you like what we do ❤️

Cannoli that have been already filled with the ricotta filling don't store well, as the filling makes the shell moist and they will become soggy. So if you have filled cannoli leftovers, store them for a max of 3 hours in the refrigerator.

The best way to store cannoli is to keep the shells and the filling separate. Store the shells for up to 4 days in a dry corner of your kitchen, covered with a cloth. Do not store them in the refrigerator as they'll get soggy.

Store the vegan cannoli filling in an airtight container in the refrigerator for up to 4 days. The filling might turn slightly off-white with time, but don't worry, it'll taste fine.

If you're also a fan of plant-based desserts, check out these delightful sweets:

Do you have a favorite sweet that we haven't made yet? Let us know in the comments below, we'd love to hear! 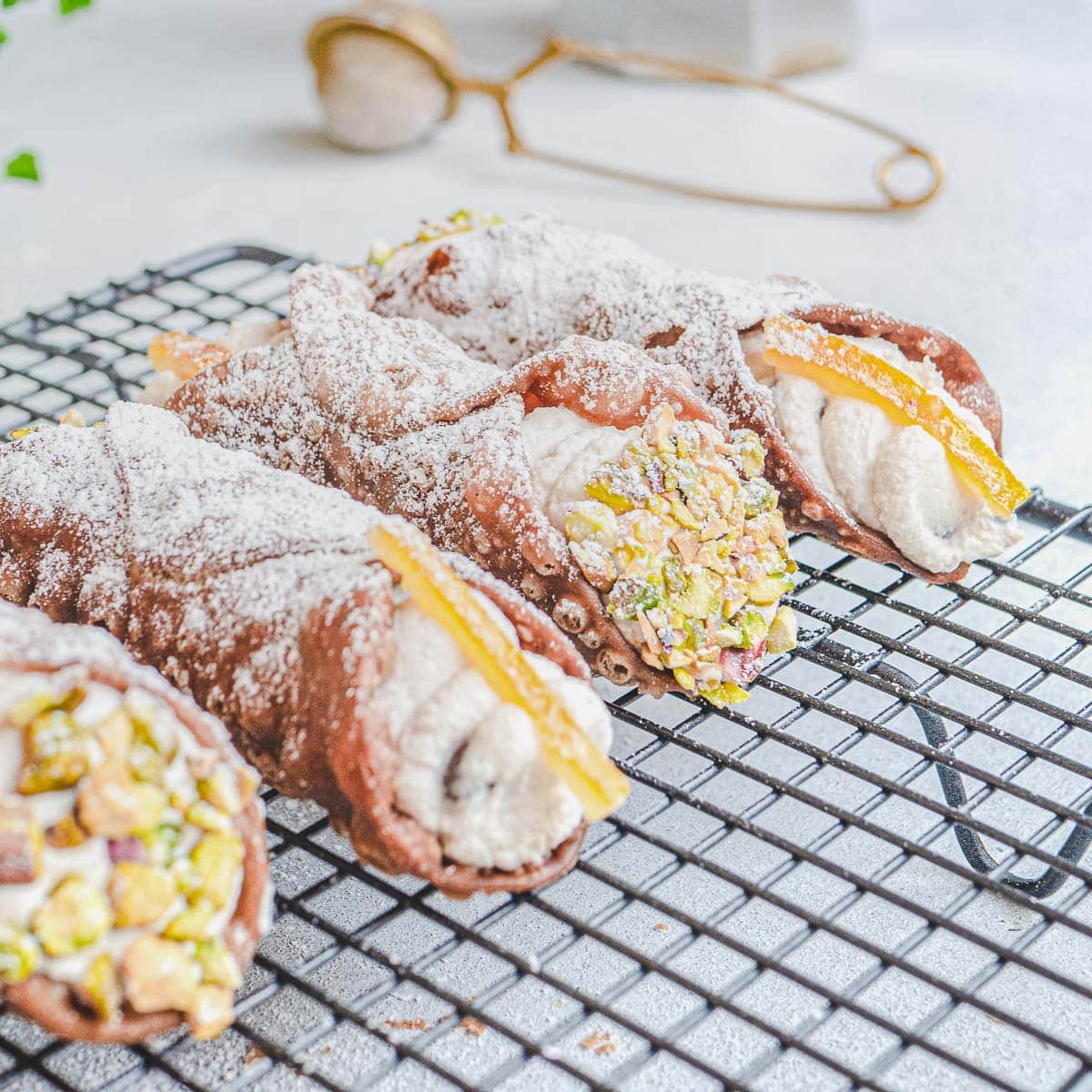 Author: Nico
This homemade vegan Italian cannoli recipe will take you straight to Sicily, the mother land of authentic cannoli siciliani. Our filling is made of vegan homemade ricotta and is sweet and creamy. The shell, is every bit as bubbly, light and crisp as the traditional one, but without eggs, lard, or butter.
Print Recipe Pin Recipe Share Recipe
4.89 from 27 votes
Prep Time 1 hr 30 mins
Cook Time 20 mins
for the ricotta 30 mins
Total Time 2 hrs 20 mins
Course Dessert
Cuisine Italian
Servings 16 cannoli
Calories 140 kcal

For the homemade vegan ricotta (you should get around 23oz / 630g)

For the cannoli filling

For the cannoli shells