Dressed with extra virgin olive oil and dried oregano, it's one of the most popular summer salads in the world.

Greek salad - Horiatiki in Greek, meaning peasant salad - is one of the most popular salads in the world.

In this blog post, we'll first show you how to make an authentic traditional Greek salad recipe as they make it in Greece.

Then we'll make one more suitable for western produce, which unfortunately might not always be as tasty as sun-kissed greek produce.

In either case, Greek salad is a refreshing recipe whose flavor relies 100% on the quality of the ingredients.

That's why we consider Greek salad a summer salad. It tastes best when it's hot outside, and these ingredients are at their peak.

If you ever went to Greece for the holidays, you'd be surprised to learn that traditional Greek salad has no dressing.

Just a generous sprinkle of dried oregano, plenty of fruity and flavorful extra virgin olive oil, and a whole block of Greek Feta cheese on top.

I took the following picture of a Greek salad on a trip to Greece in 2013. There was no vinegar, dressing, lemon juice, or Romaine lettuce among this greek salad ingredients. Just plenty of olive oil, dried oregano, and fresh veggies from their garden.

However, don't worry if your veggies don't taste as good as the greeks; we'll show you a quick and tasty Greek salad dressing that will make your salad a success.

Ripe, meaty, and juicy tomatoes, cut into wedges or big chunks. Try to get your tomatoes from a farmer's market if you have one nearby. Most common are red heirloom tomatoes and red beefsteak tomatoes, but any red medium-sized to large tomato will do.

Alternatively, you can use smaller tomatoes, such as cherry tomatoes or Roma tomatoes, although that's not common in Greece.

The cucumber in a greek salad is peeled, cut in half, then chopped into bite-size pieces. You can use garden cucumber, English cucumber, or Persian cucumber.

Green bell peppers should be fresh, hard to the touch, and crisp.

Red onion must be fresh and hard to the touch too. Try not to use old and soggy red onion.

Oregano should be rigorously dried, never fresh in a Greek salad recipe.

We recommend a good quality extra virgin olive oil because that's what you would get in Greece.

Good extra virgin olive oil doesn't require other ingredients to taste good. It has a round, fruity, and mildly nutty flavor that's all you need in this Greek salad.

Sea salt would be best.

There are a lot of Feta cheese options on the market these days. If you don't eat dairy, there are several dairy-free Feta-like substitutes you can choose from.

If you eat dairy, we recommend using a block of Feta imported from Greece.

Authentic Feta is a Greek cheese made from sheep's milk or a mixture of sheep's and goat's milk.

While in some countries, the "Feta" name is protected by law - meaning that if you buy a cheese labeled "Feta," you are going to get "real Feta" - in the US, that's not the case.

If you don't pay attention, you will not get Feta, but more of a white salty salad cheese called Feta (which might taste good, but it's not Feta).

So, if you want to eat authentic Greek Feta, make sure the cheese you are about to purchase is produced in Greece, from sheep's milk or a mixture of sheep and goat's milk.

If simple olive oil and dried oregano don't cut it for you, we've developed a simple Greek Salad Dressing you can drizzle on your Greek salad.

We think it tastes delicious; however, it is not an authentic Greek Salad Dressing recipe; there's no such thing in Greece. We made it not to alter the salad's flavor but to boost it, so go ahead and drizzle on.

The red wine vinegar adds acidity, which boosts the flavor of the veggies. The mustard emulsifies the dressing, keeping the ingredients together and helping the dressing stick to the veggies. Finally, the maple syrup adds a tiny touch of sweetness that is often missing in store-bought tomatoes.

We recommend this dressing if your tomatoes are not the tastiest.

Cut the tomatoes in half, remove their stem, then slice them into wedges.

Peel the cucumber, cut it in half lengthwise, then slice it into bite-size half moons.

Cut the green bell pepper into four pieces lengthwise, remove its stem, seeds, and white flesh, then slice it.

Cut the red onion in half, peel it, and thinly slice it.

Tip: I noticed that at least in the places I visited in Greece, tomatoes are cut in large chunks, larger than bite-size. Feel free to cut the tomatoes into smaller pieces if you prefer.

Arrange chopped tomatoes, cucumbers, and bell pepper onto a plate or serving platter.

Add Kalamata olives, a sprinkle of dried oregano, a pinch of salt, and a drizzle of olive oil.

Place a block of Feta on top of the veggies, sprinkle with more dried oregano, and drizzle with more olive oil.

Close and shake the jar until the ingredients are combined.

Tip: If you don't have a jar, you can whisk the ingredients in a small bowl.

Cut tomatoes into wedges or cherry tomatoes in half. Slice the cucumber, red onion, and green bell pepper. Gently dice the Feta into ½ inch cubes.

Arrange tomatoes, cucumber, bell peppers, red onion, and olives onto a serving platter or a large bowl. Top with feta cubes, drizzle with the Greek salad dressing and toss.

Greek salad is served mainly as a quick, nutritious, and refreshing lunch on hot summer days.

However, pair this recipe with a creamy-dreamy hummus, eggplant dip, avocado spread, and some warm pita bread, and you've got yourself a delicious and healthy dinner.

You can make smaller portions with diced Feta and serve it as a starter alongside other delicious Mediterranean bites. Try it with bruschetta, crostini, olive tapenade, zucchini frittata, tomato confit, and many more.

We put together a round-up post with our favorite starter recipes for you to check out.

Finally, you can serve Greek salad as a tasty side dish alongside one of our many easy plant-based dinners.

It's unsurprisingly similar to a greek salad, as both Mediterranean countries heavily rely on fresh tomatoes, cucumber, onion, and herbs for their summer meals.

This greek-inspired watermelon salad with Feta substitutes watermelon cubes for the tomatoes. It's a delicious salad that we absolutely love.

If you have never had it, you are in for a treat, and we can't wait to hear what you think.

Check out our watermelon salad recipe.

Cucumber tomato salad is similar to Greek salad, minus the Feta and bell pepper, but with some fresh herbs.

Enjoy this crunchy and easy recipe during scorching hot summer days. You can add some protein and upgrade it to a quick, healthy main.

Greek salad is best consumed right after you make it. The veggies will get watery, release their juices, and lose freshness and crunch as they sit in the fridge.

Store leftovers in an airtight container for up to 24 hours.

What are the ingredients for a Greek salad?

In some regions in Greece, capers are added, especially on some Greek islands.

No, traditional Greek salad does not contain lettuce.

What is the dressing made of in a Traditional Greek salad?

There is no "dressing" in a traditional greek salad. Instead, the salad is seasoned with extra virgin olive oil, salt, and dried oregano.

If you love vibrant meals packed with fresh veggies, check out our most loved recipes with raw ingredients:

For many more salad ideas, check out our salads category page. 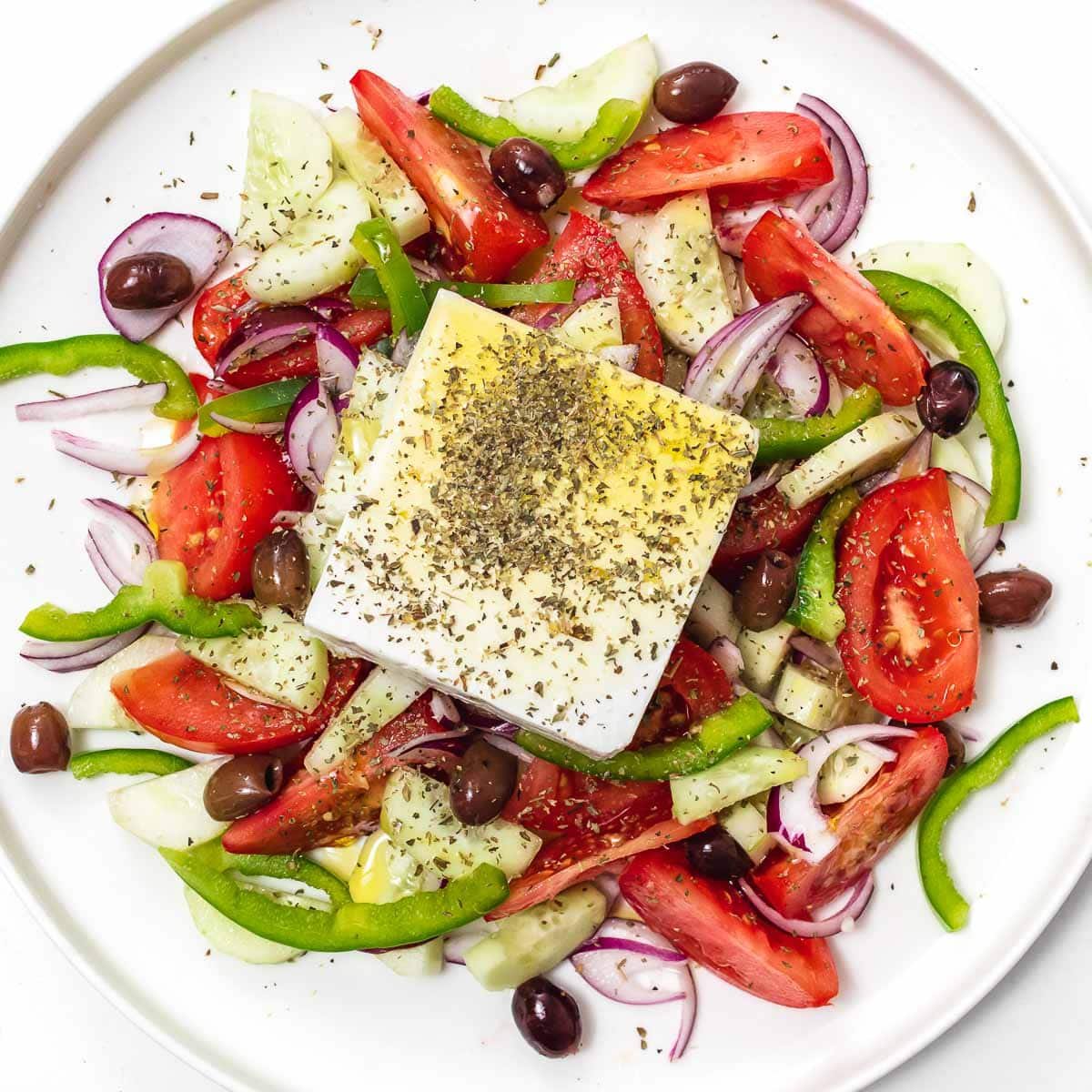 Nutrition information is for one large portion of Greek salad out of two with traditional seasoning and dairy-based Feta cheese.