I'll show you how to make a 100% authentic Panzanella recipe. The exact recipe you'll find in restaurants in central Italy, where Panzanella is from. The same recipe my grandma made for me growing up.

Panzanella is an Italian bread salad originating in the centenary peasant traditions of central Italy, especially in the Umbria, Tuscany, Lazio, and Marche regions.

The flavor and texture of Panzanella salad are impressed in my memory like a Proustian madeleine, as this has always been my favorite summer salad growing up, and it's still associated with a feeling of freedom, safety, and happiness.

Two days old stale bread soaked in water and vinegar absorbs the tomato and onion juices and flavors like a sponge.

The flavorful soft stale bread, combined with crisp cucumber, meaty tomatoes, tangy red onion, and fruity extra virgin olive oil, creates a palette of textures and flavors that are irresistible. And all that with very basic, everyday ingredients.

There are many versions of Panzanella; some people add carrots, celery, and other vegetables. Some complicate the process with unnecessary extra steps, completely missing the essence of this recipe.

Panzanella was and still is a simple and humble salad, created from the need of rural farmers to use what was available at home without spending a penny.

It's a naturally vegan, zero-waste recipe and a great way to reuse stale bread. This version is just like the one I used to eat as a kid growing up in Todi, Umbria, and you can still find it on the menu of many local restaurants.

One to two days old stale bread is best to make Panzanella. Ideally, use crusty bread with a compact crumb to absorb liquid without falling apart.

Avoid baguettes and packaged bread such as sandwich bread, rolls, and buns. They'll fall apart and get mushy in the salad.

Panzanella is essentially a tomato salad. Being the main ingredient, try to use good quality tomatoes, ideally organic, like the ones you can find in a farmer's market.

The tomatoes should be ripe but firm to the touch. They should also be consumed at room temperature to fully appreciate their taste.

You can mix more tomato varieties, and locals in Italy use what they have at hand without being too fussy.

Our favorites are San Marzano tomatoes, Heirloom tomatoes, cherry tomatoes, and Roma tomatoes, but again, tasty ripe tomatoes will do.

You can use garden cucumber, English cucumber, or Persian cucumber. You can keep the peel on or peel it off if you prefer.

Red onion adds a sharp, almost spicy flavor that fits perfectly with the Panzanella salad. Slice it as thinly as possible, and if the onion is too strong for you, you can soak it in cold water for ten minutes before adding it to the rest of the ingredients.

Fresh basil adds a mellow, sweet, and round aroma and that taste of Italy. I have never replaced basil with any other fresh herb in Panzanella; however, if you'd like to, you could use other fresh herbs such as parsley and dill.

Lettuce is optional. Some Italian Panzanella salad recipes include lettuce; others don't. We made a variation with lettuce to show you how it looks, and we loved it.

However, if you use balsamic, the bread will look darker and less appealing. So we use white wine vinegar.

Season Panzanella with a good pinch of sea salt (or kosher salt) and a few twists of freshly ground black pepper.

Break up the stale bread into big chunks and add them to a bowl. Cover them with water and two tablespoons of vinegar.

Soak until the bread becomes soft. It can take 5 to 30 minutes for the bread to soften up, depending on how dry it is and the type of bread.

Don't let the bread soak for too long, or it'll get mushy. Some of the bread pieces should be harder than others. The crust especially should retain some bite to it.

With your hands, squeeze the water out of the soaked bread, then coarsely crumble it into a large bowl. There's no need to have neat bread cubes.

Cut the cucumber half lengthwise, then cut each half into thin slices.

Next, cut the red onion in half, peel it, then cut it into thin slices.

Note: there's no need to whisk the condiments into a vinaigrette. That's not customary in a classic Panzanella salad.

Mix the ingredients well and set aside 10 to 30 minutes before serving the Panzanella salad.

Serve Panzanella in small portions or on a platter as an appetizer. It goes well with:

Serve a larger portion and make it a main meal for a quick, easy, and healthy lunch by adding olives, chickpeas, and beans, and if you are vegetarian, you can even add some crumbled feta cheese.

Panzanella is excellent for a vegetarian lunch because it feels light, but it's fulfilling at the same time.

As a side dish for dinner

We have plenty of easy vegan and vegetarian dinners to choose from. For example, try Panzanella next to:

This Panzanella salad recipe is popular in the most central Italian region, Umbria. We love this version, and it's what we usually make in our home. Pick some fresh and crunchy Romaine lettuce, chop it up, and add it to the bowl with the remaining ingredients.

In some areas in central Italy near Rome, you'll see a version of Panzanella that looks more like Bruschetta with tomatoes. Wet slices of stale bread with water and top with chopped tomatoes, basil, vinegar, and olive oil.

Choose unsalted artisanal white bread just like the Tuscan bread. Don't add the lettuce. Sometimes in Tuscany, you'll see the vegetables in the Panzanella cut into long thin slices. In some areas, they add celery.

In Puglia, they often use Friselle instead of bread. Friselle are large, round pieces of dry, baked durum wheat flour, often with a hole in the center.

We make this variation during the colder months. Use cherry tomatoes instead of vine tomatoes; add 1 cup (200 grams) of white cannellini beans instead of the cucumber.

This is another of our favorite variations as the chickpeas make this salad an excellent main dish with plenty of protein. We also add a sliced stalk of celery, a handful of arugula, and two grated carrots.

If you have the time for it, let the Panzanella rest in the vegetable zone of your refrigerator for about 45 minutes to let the flavors meld together, then take it out of the fridge and keep it at room temperature for another 30 minutes before serving it.

Please don't leave it in the fridge too long; your tomatoes will lose texture and flavor.

Yes, the original recipe for Panzanella is 100% vegan as it does not call for animal-based ingredients.

Where does Panzanella come from?

It comes from the central Italian regions of Umbria, Tuscany, Lazio, and Marche.

What goes with Panzanella salad?

Panzanella is generally eaten as a side salad or in restaurants and pizzerias as an appetizer. In our home, we like to eat Panzanella next to some grilled vegetables and hummus or next to one of our easy vegan dinners.

What does Panzanella mean in Italian?

Does Panzanella keep in the fridge?

Panzanella does not store well in the fridge due to the wet bread, tomatoes, and vinegar. Our advice is to keep it for max up to half a day.

Can Panzanella be made ahead of time?

For best results, Panzanella should be made 1.5 hours before serving time, then stored in the fridge in the vegetable zone for about 45 minutes to let the flavors come together, and then let out at room temperature for another 30 to 45 minutes before serving.

However, if you want to make it in the morning for dinner service, then don't season it but rather add oil and vinegar just before serving.

Can you make Panzanella with croutons?

Yes, but the result won't be like authentic Panzanella. If you decide to soak your croutons, you might want to do it quickly as they'll lose structure and turn into a mash.

We recommend storing Panzanella for up to 12 hours in the refrigerator. Once out of the fridge, leave it at room temperature for at least 30 minutes.

Panzanella salad doesn't store well because the vinegar will ruin the lettuce, and the cold temperature of the refrigerator will destroy the texture and flavor of the chopped tomatoes. Also, the bread will lose too much texture if stored too long.

A fresh bowl of salad is an easy way to increase your veggie intake and get extra nutrients. If you wanna get more inspiration for green meals, take your pick from these favorite salads:

Want more? Get fresh ideas from our list of 25 best vegan salads, including grain bowls and salads for winter.

If you like Italian cooking and Mediterranean flavors, get some dinner inspiration from these Italian classics:

For more inspiration, check our list of 65 vegan Italian recipes, or these 40 pasta favorites.

For many more side dishes ideas, check out our sides category page. 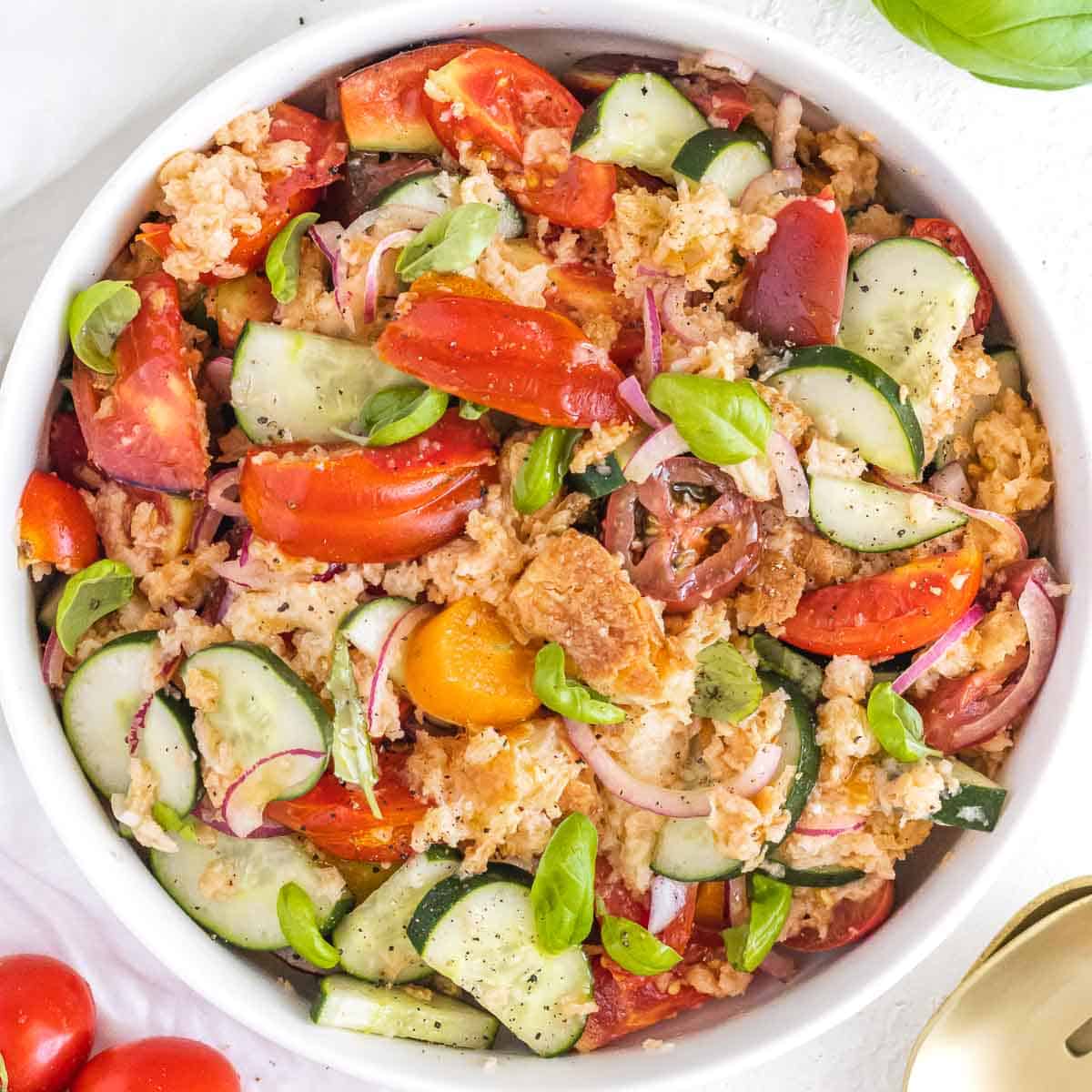 *The weight of stale bread can vary depending on the type of bread. Use our measurements as an indication. If you use fresh bread, that's heavier than dry bread, so you'll have to use a little more. Servings: you can serve up to 4 people if you serve it as a main dish for lunch. If you eat it as a small appetizer or small side dish then you can serve up to 8 people. Nutrition information is for 1 large serving out of 4. Panzanella with Lettuce Add chopped romaine to the other ingredients to make an even crunchier Panzanella salad with lettuce. 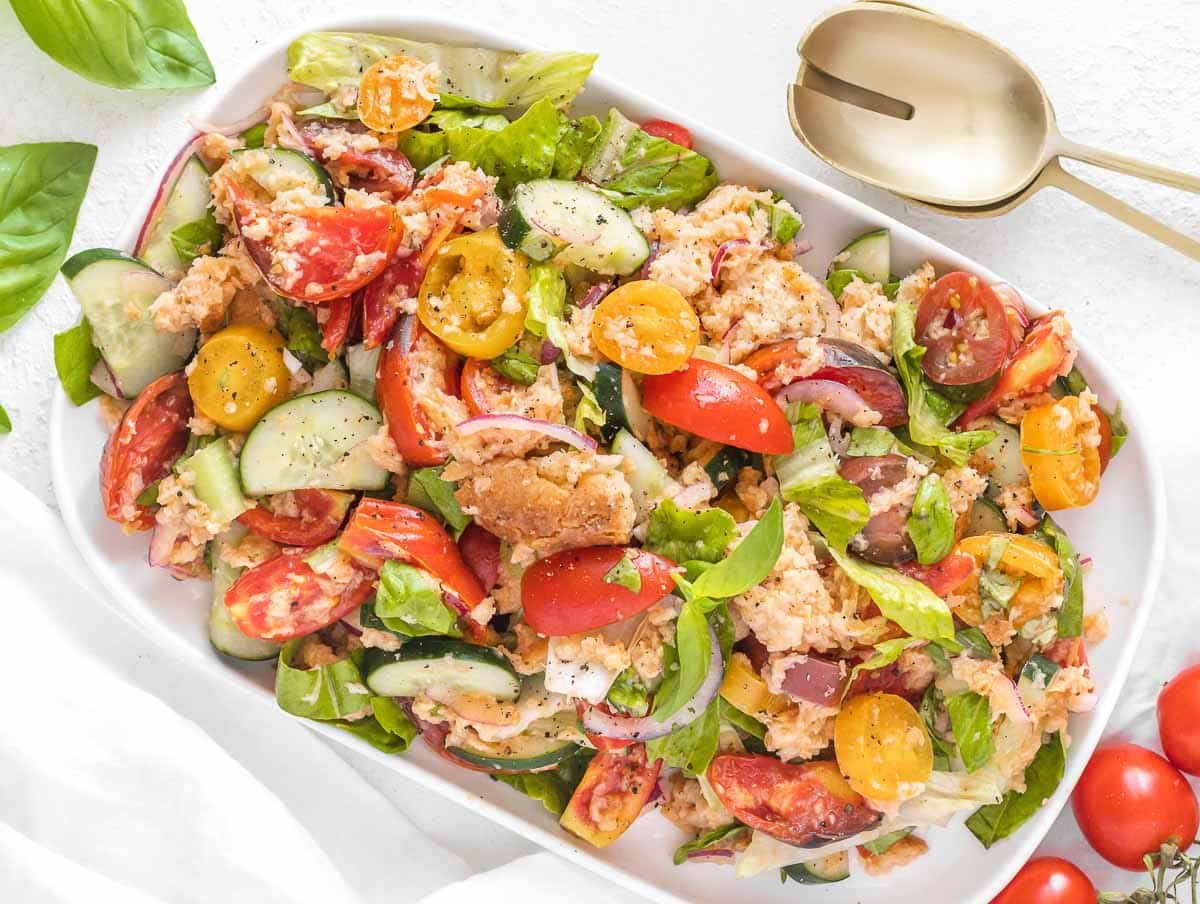