Vegan french toast is one of the best weekend breakfasts ever. Our recipe makes a perfectly thick french toast that is crispy on the outside, and silky on the inside.

You won't miss the eggs, and best of all, you can make it in 10 minutes with everyday ingredients.

French toast is a sweet weekend breakfast dish made with thick slices of bread soaked in a batter of eggs, milk, sugar, and spices.

The bread is then pan-fried with butter and served with maple syrup, butter, berries, or other toppings.

Our vegan french toast recipe does not use eggs and dairy. We make a simple egg-free batter that tastes as delicious as the original, then we pan fry the bread with non-dairy butter.

Follow our recipe to make a french toast that is crips on the outside and moist and silky on the inside, and as delicious as the original recipe.

Note: we tried adding nutritional yeast or black salt (Kala Namak) to add that eggy flavor, but in the end, we much prefer the french toast without those two ingredients. Also, there's absolutely no need for ground flax or flax egg.

Which bread is best for french toast?

I like my french toast with 1-inch or 2.5 cm thick bread slices. So first things first, I'd recommend slicing the bread yourself.

French toast should be crisp on the outside, but super soft, moist, and silky on the inside.

To achieve this you need bread with a soft but dense crumb, that absorbs the batter slowly, but fully, and that keeps its shape once soaked.

Sandwich bread is too soft for instance, it will get all mushy and will fall apart.

I'd recommend getting a loaf of rustic white bread (I know, bread names change depending on where you live). It helps if it's a day old, and a little dry.

It could be an Italian rustic bread loaf or a thick ciabatta bread from Whole Foods. Sourdough could work too, as long as the crust is not too hard.

You can top your vegan french toast with anything you like, from hazelnut chocolate spread to jams, to a dollop of coconut whipped cream.

We like ours with fresh berries, powdered sugar, 100% pure maple syrup, and a good quality 100% plant-based margarine (without hydrogenated fats or palm oil), or sometimes vegan butter.

To make it, you’ll need 6 slices of sturdy bread. I use a one-day-old rustic white bread loaf and I like to cut it myself at around 1 inch or 2.5 cm thick slices.

Stir with a whisk to combine all the ingredients. This is going to be our base custard-like mix to dip the bread in.

We use a baking dish to keep the batter, but you can always use a large bowl if you don't have a container like ours.

Now, in a nonstick pan or skillet melt a tablespoon of vegan butter or of a good quality plant-based margarine (no hydrogenated trans fat and palm oil).

While the pan warms up, soak two slices of bread in the liquid. Soaking time depends on how old the bread is, and on the type of bread.

In my case, I soak it for a good minute, on both sides, till the batter gets deep into the bread. I give the bread a good squeeze so that it absorbs even more batter.

But If you have softer bread, you might want to be faster than me. Just make sure the bread absorbs the liquid, without getting all mushy and falling apart.

Tip: What’s important with french toast is that the bread is well soaked, but still with a firm crumb.

Transfer the bread to the hot pan and cook on medium to low heat until nicely golden brown and crisp, then turn around and do the same on the other side.

It should take you between 2 to 4 minutes, depending on the type of bread, so keep an eye on it.

You can add as much bread as you can fit on the pan. If the pan gets too dry, then add more vegan butter.

In the end, you want the bread to be brown and crisp on the outside, and super soft and silky on the inside.

Tip: keep the pan well-buttered, to prevent the bread from burning.

Transfer the toasted bread to a plate and repeat till your run out of bread, whipping the pan clean and adding more vegan butter between batches.

With our quantities of batter, you should be able to make 6 slices, which is about 3 servings.

Tip: If you want to keep the toasted bread warm, keep it in a slightly warm oven while you finish cooking the other slices.

Now that we are done toasting we can serve the french toast. Arrange a slice of bread on a plate, add a piece of vegan butter on top, and dust with powdered sugar.

Then arrange the second slice of french toast, on top of the other slice, sideways. Add the butter and the powdered sugar.

Finally add a generous drizzle of 100% pure maple syrup, a few blueberries, and raspberries on top, and enjoy this crazy simple yet indulgent french toast.

It’s crunchy on the outside, warm and silky on the inside, and with that cozy cinnamon-nutmeg aroma it’s really hard to beat.

Is french toast from France?

Did you know that french toast, despite the name, is not originally from France?

Before writing this article I didn't. But it seems like french toast has been a thing since the Roman Empire and appears in recipe manuscripts from the 5th Century AD.

What? Did the Romans really celebrate Sunday breakfast so decadently?

We don't know for sure, but what we know is that like with modern French Toast, they would soak stale bread in a batter of egg and milk, then they'd fry it in butter. The name of this dish was "Pan Dulcis" or sweet bread.

A few centuries later, through the middle ages in Europe, french toast became a thing more out of necessity.

During the dark ages, food was scarce, and people would simply reuse all they had, including stale bread. They would moisten it up with whatever they had, add eggs if available, then they'd fry it up.

This dish was called different things in different countries. In France for instance, the name was "pain perdu" or lost bread.

Where does the name french toast come from?

The most plausible explanation, to me, is that french toast, like french fries, has nothing to do with France, but rather comes from the old Irish language, where the verb "to French" means to slice.

And so french fries means sliced fries, and french toast means sliced toast. Makes sense to me, so I'll go with it.

You can make this recipe yours by using your favorite toppings. Don't have maple syrup? Top this recipe with jam or hazelnut spread.

Don't have berries? You can use a sliced banana.

To make gluten-free french toast, substitute cornstarch for the flour, and gluten-free bread for white bread.

If you love this vegan french toast recipe, try our other brunch-friendly recipes:

PSST! If you're (also) a fan of sweets for your brunch, check out our favorite plant-based desserts and find your favorite!

French toast leftovers do not keep well. We recommend eating it as soon as it's made. If you really must, keep it in an airtight container in the fridge, and reheat it on a well-buttered pan. 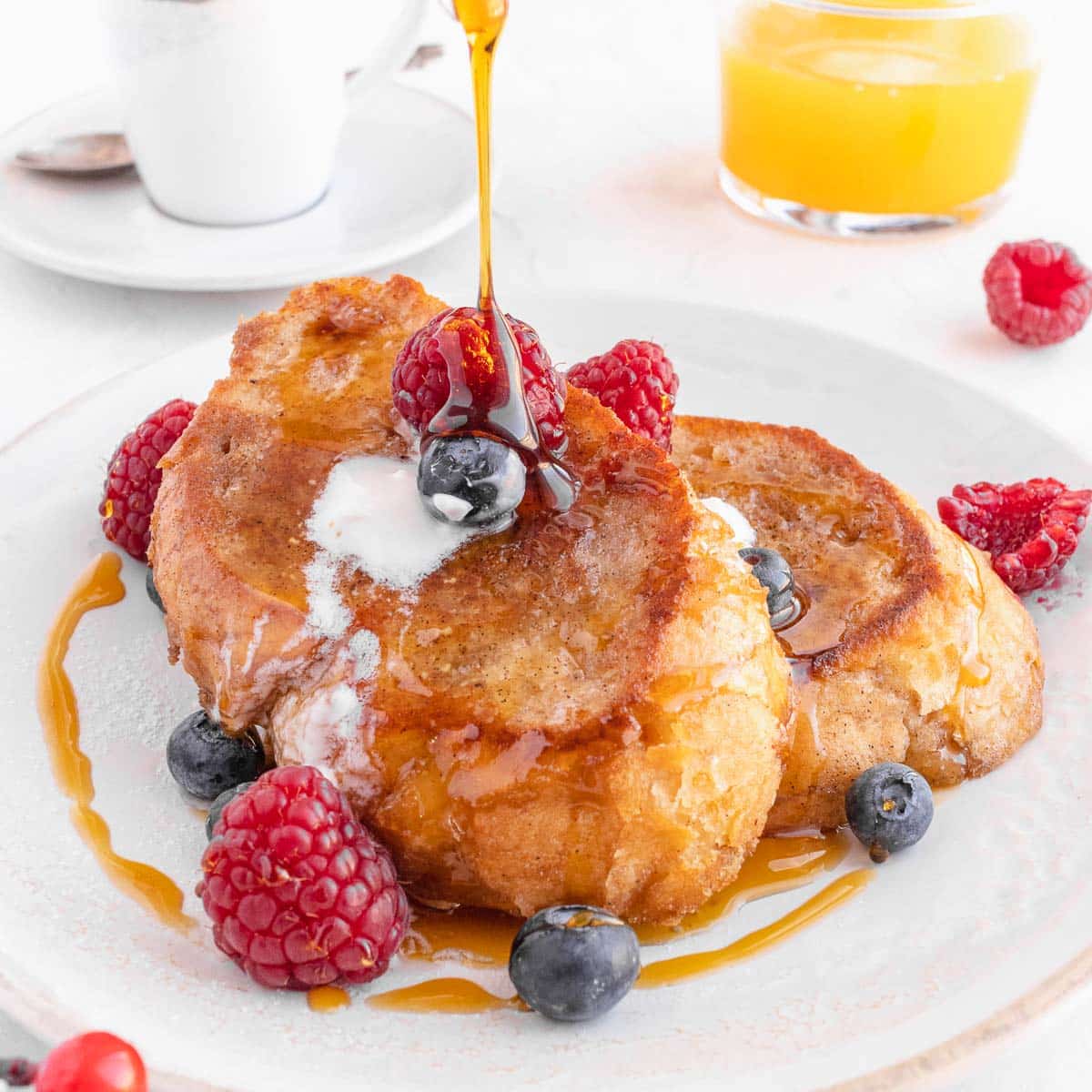 Author: Nico
Vegan french toast is one of the best weekend breakfasts ever. Our recipe makes a perfectly thick french toast that is crispy on the outside, and silky on the inside.You won't miss the eggs, and best of all, you can make it in 10 minutes with everyday ingredients.
Print Recipe Pin Recipe Share Recipe
4.67 from 3 votes
Prep Time 5 mins
Cook Time 15 mins
Total Time 20 mins
Course Breakfast, Brunch
Cuisine American
Servings 3 people
Calories 534 kcal