Baked pears are an easy yet elegant sweet and tender dessert that only requires four ingredients and 30 minutes in the oven.

They are one of the simplest yet incredibly cozy and tasty recipes you can make. Their natural sweetness and butter-like texture will wow everyone around your table.

Baked pears are such a delicious and crowd-pleasing dessert that we always get surprised by how simple it is to make them.

They are perfect as a weeknight treat because they require no effort, but they are also great for a special occasion like a holiday meal with family and friends because they are so pretty and delicious.

And while this baked pear recipe is healthier than most desserts, they are also packed with a ton of flavor!

The combination of pecans, cinnamon, maple syrup, and the pears' soft, warm, melty flesh will leave you begging for another portion.

Serve the baked pears with a scoop of vanilla ice cream and, optionally, a drizzle of caramel sauce. It's a beautiful plant-based dessert or Sunday brunch idea, and if you have leftovers, you can eat them the day after for breakfast with your oatmeal.

Use medium-sized to large pears. Not too soft, not too hard. The best pears are Bartlett, Bosc, or Anjou pears, but to be honest with you, the variety is not that important.

We tried several others, and they were all delicious. Unfortunately, canned pears are not suitable for this recipe.

You could use apples instead, but apples need to cook for about 1 hour.

To ensure your pears are not too hard or too soft, apply some pressure to the neck of the pears with your thumb. If the flesh gives in to your pressure, the pears are ripe.

If you bake pears that are not ripe, add ¼ cup of water to the baking pan and double the cooking time to 1 hour.

Cinnamon is a perfect flavor match with pears. Add as much as you like based on your preference. If you make this recipe during winter, you can add other spices such as clove, ginger, and nutmeg.

Pecans or walnuts are the best nuts to go with pears. Their flavor matches perfectly that of the tender and sweet pears. The next best alternatives are almonds or hazelnuts if you don't have pecan or walnuts.

Maple syrup is an excellent match with pears; make sure it's 100% pure maple syrup. You can substitute agave syrup, honey, or brown sugar for maple syrup.

Preheat the oven to 350°F or 180°C. Wash and cut the pears in half lengthwise, then scoop out the seeds.

Tip: we use a measuring spoon or teaspoon to scoop out the core and seeds. Try to preserve the stems as they look pretty on the baked pears.

Optionally, you can cut off a sliver on the other end so they sit upright.

Place the pears on the baking dish, with the cut side facing upward.

Fill each pear with a few pieces of pecan or walnuts. Then drizzle with some maple syrup, and sprinkle with cinnamon. Quantities depend on your taste and dietary needs.

Tip: add maple syrup before the cinnamon. If you add cinnamon first, the maple syrup won't stick to the pears and will end up on the bottom of your baking pan.

You can serve baked pears with cinnamon as they are straight after baking them (just let them cool down for 5 minutes) or at room temperature.

Initially, we thought that each person gets half a pear, but to be honest with you, they are so delicious that you'll need to account for one pear per person.

You can also serve baked pears with a scoop of ice cream. Vanilla and chocolate are best for pears.

You can also serve them with greek-style yogurt (regular or dairy-free) for a lighter variation. Our favorite is serving them with unsweetened soy yogurt, but most other yogurts also work well.

You can also top them with granola if you want to add some extra crunch. Or add some more nuts or sesame seeds.

As a final serving suggestion, try baked pears with our oatmeal pancakes or vegan crepes for delicious Sunday morning breakfast or brunch.

And if you have any leftovers, you can have them on top of your oatmeal for breakfast the day after.

Can they be made ahead?

Yes. You can make baked pears a few hours ahead and serve them at room temperature.

Can I use apples instead of pears?

Yes, you can. Follow the same recipe, but cook the apples for 1 hour instead. Or, try these baked apples with an indulgent streusel topping.

Should pears be peeled before baking?

No, you don't have to peel pears before baking. The peel is nutritious, and it will get soft with cooking. Just rinse them well, and you are good to go.

What are good baking pears?

Bartlett, Bosc, or Anjou are best for baking. However, we tried many other varieties, and they all turned out great.

Can you bake pears that are not ripe?

Yes, you can bake pears that are not ripe. However, they'll take about 1 hour of cooking time. If you bake unripe pears, add ¼ cup of water to the baking pan.

Store baked pears in the refrigerator in an airtight container for up to 3 days. After that, they are not suitable for freezing.

To reheat the leftovers, put them in a preheated oven at 350°F or 180°C for 10 minutes or warm them up in the microwave.

You can also eat them cold, but not straight from the fridge. They are best at room temperature, so leave them out of the refrigerator for 30 minutes before eating them.

If you're curious about more plant-based desserts, check out these favorites:

For more cake and pie inspiration, see our 43 best plant-based desserts that will change your life. 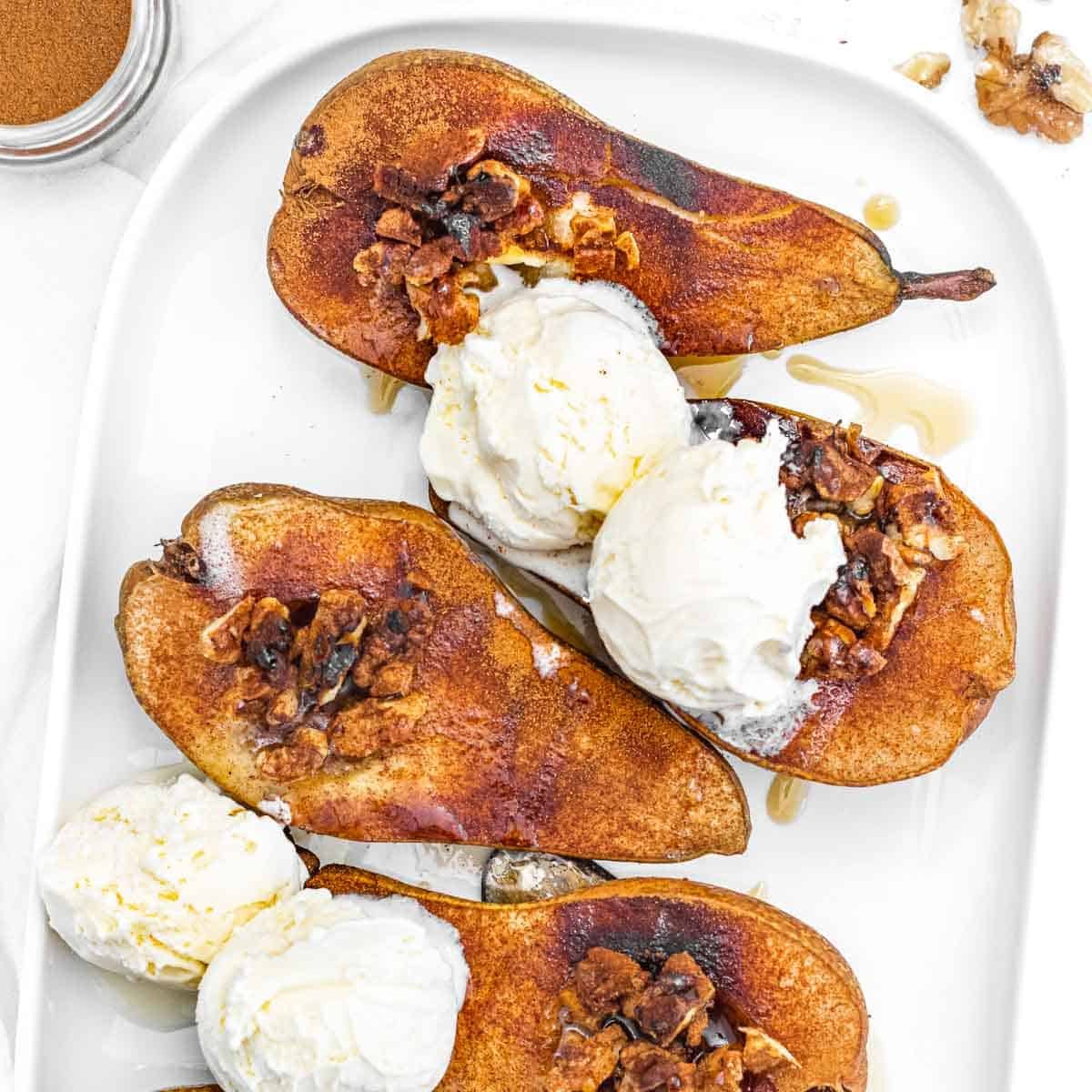 Author: Nico
Baked pears are an easy yet elegant sweet and tender dessert that only requires four ingredients and 30 minutes in the oven.They are one of the simplest yet incredibly cozy and tasty recipes you can make. Their natural sweetness and butter-like texture will wow everyone around your table.
Print Recipe Pin Recipe Share Recipe
5 from 9 votes
Prep Time 5 mins
Cook Time 30 mins
Total Time 35 mins
Course Dessert
Cuisine American, International
Servings 4 people
Calories 190 kcal

Easy Baked Pears | a healthy dessert for the weekdays!

Nutrition information is as estimate for 1 baked pear per person. TIPS