Shirazi salad is a refreshing Iranian dish made with chopped cucumber, tomatoes, and onion and seasoned with dried mint.

Salad-e Shirazi is an easy recipe with a few simple ingredients and a uniquely minty flavor. You can serve it as a tasty appetizer or side dish.

Shirazi salad (also known as Salad-e Shirazi) takes its name from the people of Shiraz, a city in Southwestern Iran, where this recipe is akin to a national dish.

They serve it throughout the year, mainly as an appetizer or as a side dish.

The main ingredients in this salad are cucumbers, tomatoes, and onions. However, while this dish looks similar to an Israeli salad, Taboule, or a simple cucumber tomato salad, its taste is unique thanks to the use of dried mint as the main seasoning herb.

The original Shirazi salad recipe calls for Verjuice in the dressing. Verjuice (ab-ghooreh in Persian) is a sour grape juice from crab apples, unripe grapes, or other fruit.

However, since Verjuice is not common in western supermarkets, you can replace it with lime juice or lemon juice.

Our favorite way to enjoy this dish is as an appetizer (easily turned into a main meal) with other delicious Middle-Eastern and Mediterranean recipes such as our creamy-dreamy hummus, eggplant dip, and Moroccan carrot salad. Check out our "serving suggestions" chapter for more inspiration.

If you can't find Persian cucumbers, you can replace them with American garden cucumbers or a large English cucumber.

However, if your cucumbers have a lot of seeds, you might want to discard some.

Ripe, juicy, and meaty tomatoes are best for this recipe. We like to use beefsteak tomatoes or heirloom tomatoes.

If you can't find these, you can use Roma tomatoes, or other tomato varieties, as long as they are ripe but not overripe and soft. Please ensure you use tomatoes at room temperature, as they taste much better when not cooled.

White onion is best for this recipe; however, if that's too harsh for you, substitute a shallot or scallions for the onion. You could also use red onions if you prefer those to white onions.

Dried mint is the key ingredient in traditional Shirazi salad, and I would not replace it with anything else.

We tried using fresh mint; however, the salad's flavor differs substantially from fresh mint, so we can't recommend it.

We use lime juice or lemon juice instead of Verjuice (ab-ghooreh in Persian), a sour grape juice obtained from crab apples, unripe grapes, or other fruit that is difficult to find in western supermarkets.

Extra virgin olive oil is not always used in the original recipe; however, we like to add some to balance the citrus's acidity and the freshness of the cucumber and tomatoes.

Extra-virgin olive oil is best because it has a better, fruitier, and richer flavor. It's also healthier than regular olive oil as it contains more antioxidants.

Use sea salt or kosher salt for the best flavor and freshly ground black pepper.

We've seen people add fresh herbs such as fresh parsley, dill, cilantro, olives, and green bell peppers. While these ingredients are not present in the original Shirazi salad recipe, they are a good flavor match, so feel free to add them in if you like.

Finely chop the cucumbers into about ⅕-Inch or 0.5 cm dice and add them to a large bowl.

Tip: if you use small Persian cucumbers, you can chop them up. If you use big English cucumbers or garden cucumbers, we recommend peeling off some skin and removing some of their seeds.

Finely chop the tomatoes into about ⅕-Inch or 0.5 cm dice and add them to the same mixing bowl.

Finely chop the white onion and add it to the same bowl.

Tip: there's quite a bit of dried mint in Shirazi salad. Start adding one tablespoon, mix, then add more if you like. We like it with one and a half tablespoons of dried mint.

Mix the salad well until the mint is distributed evenly, then taste, and adjust for salt before serving.

Tip: you can make the salad an hour before serving it for the flavors to meld. Remember that tomatoes should be eaten at room temperature for the best taste, so if you keep the salad in the fridge, take it out at least 15 minutes before serving it.

We love serving it with other Middle-Eastern and Mediterranean dishes and eat it as a tasty, nutritious, fulfilling brunch, lunch, or dinner. For example, it goes well with any of these dishes and plenty of warm pita bread.

It's best to make this salad about 1 hour ahead of time so that the flavors have time to meld, and it'll taste delicious.

You can also make it up to a day ahead of time and store it in the fridge. However, if you do so, the tomatoes and cucumbers might lose some water, making the salad watery.

If this happens, drain some of the liquid from the salad, then add fresh olive oil, and lime juice before serving it.

Also, keep the salad for 15 minutes at room temperature before serving it because the tomato tastes best when it is not cooled.

Store Shirazi salad in an airtight container in the refrigerator for up to 2 days. We do not recommend freezing this salad.

Do you need to peel Persian cucumbers?

No, you don't need to peel Persian cucumbers because their skin is very thin and completely edible.

What does Shirazi mean?

Shirazi is the name of the people of Shiraz, a city in southwestern Iran.

Can you substitute regular cucumbers for Persian cucumbers?

Yes, you can substitute regular cucumbers, such as American garden cucumbers or English cucumbers, for Persian cucumbers.

However, regular cucumbers might have a thicker peel and more seeds than Persian cucumbers, and you might need to peel them or seed them.

If you are looking for more tasty and refreshing salads with tomatoes and cucumbers, check out our:

You probably realized we love big tasty salads, right? Here are some more delicious ones: 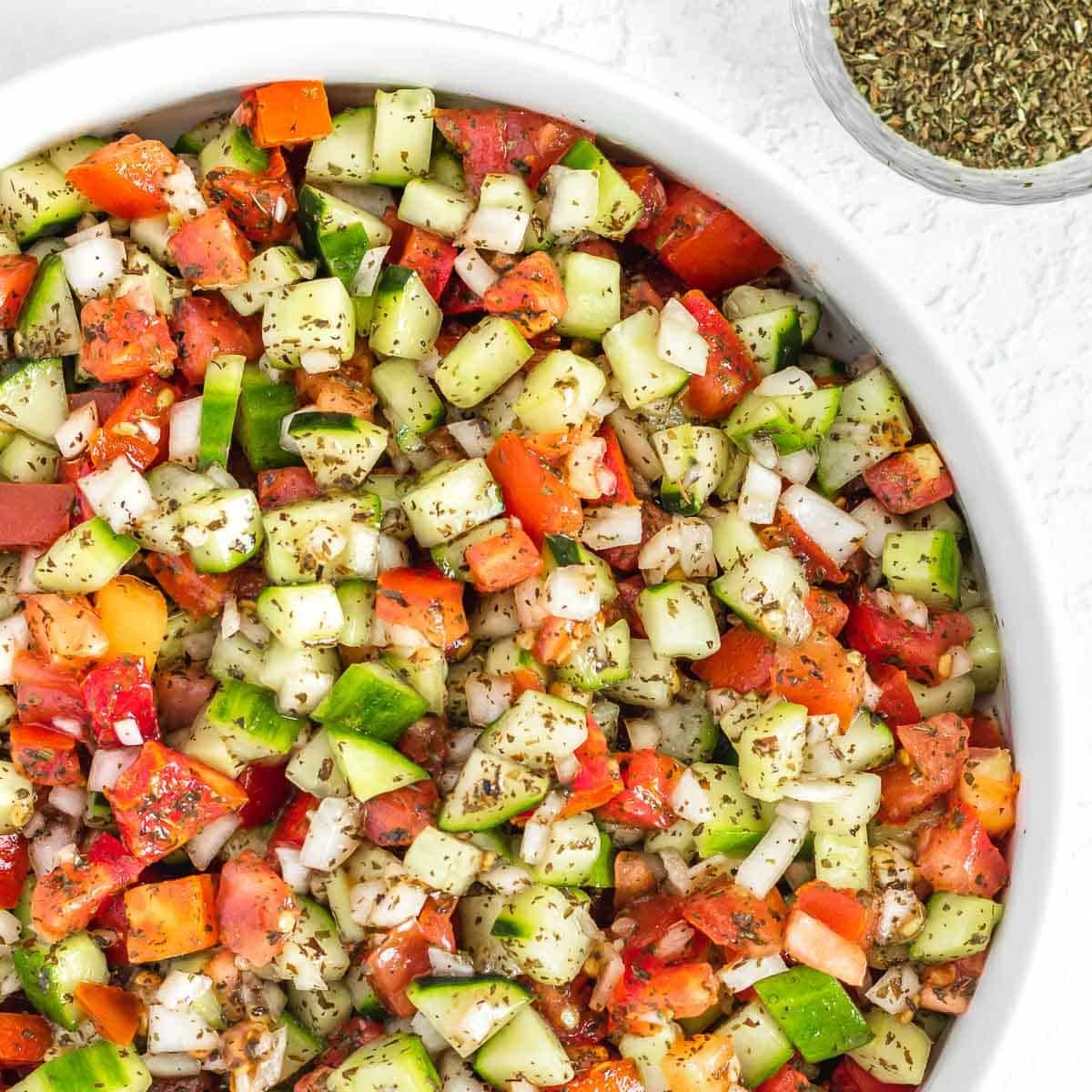