Tabbouleh - also spelled tabouli - is a tasty and refreshing Levantine parsley and tomato salad. Make it with simple ingredients such as bulgur, lemon juice, scallions, and olive oil.

Serve tabouli as a starter on a platter with other Middle Eastern foods, as a side dish, or make it ahead and bring it to picnics and potlucks.

Tabbouleh is a delicious traditional Lebanese salad you can enjoy as an appetizer or a quick lunch with a piece of pita bread and some creamy chickpea hummus.

The first and most important thing to know when making authentic Levantine tabouli is that the predominant feature of this tasty salad is finely chopped flat-leaf parsley, not bulgur.

That means that tabbouleh should look primarily green, colored by the parsley, and not white from too much bulgur.

The second most important ingredient is ripe tomatoes, chopped into small pieces. Pick meaty tomatoes that ideally are not too watery. Best are organically grown tomatoes from a farmer's market.

The parsley and the tomatoes are mixed with bulgur, scallions, extra virgin olive oil, lemon juice, mint, salt, and pepper.

Serve it on a mixed meze platter in a lettuce leaf with other small Middle-Eastern or Mediterranean dishes, such as hummus, baba ganoush, grilled eggplant, olives, and falafel, warm pita bread, crostini, olive tapenade, and more.

Flat-leaf parsley (not curly parsley) is the predominant ingredient in tabbouleh salad. First, remove the larger stems, then chop the leaves with a sharp chef knife on a cutting board.

I've seen recipes calling for chopped parsley in a food processor, but that's something we wouldn't do as the speed of the blades can ruin the fresh flavor and texture of the parsley.

We use large beefsteak tomatoes or heirloom tomatoes. Try to get them in season at a farmers' market, as organically grown tomatoes grown outdoors (not in a greenhouse) tend to be less watery, meaty, and tastier.

We recommend a sharp knife or a serrated knife to chop them into small pieces.

If the tomatoes are very watery, you can let them drain in a fine mesh strainer for 10 minutes while you chop the parsley.

You can replace tomatoes with pomegranate seeds.

Scallions - also known as green and spring onions - are another key ingredient of a traditional tabbouleh salad recipe. They add a little tang without being overpowering.

Like the other ingredients, they are also finely chopped up until their light green parts.

You can substitute white onions for scallions.

We use regular bulgur wheat that you can find in most supermarkets. First, we boil it in lightly salted water as instructed on the package; then, we let it cool down before adding it to the other ingredients.

However, authentic tabbouleh uses a finer type of bulgur that you soak rather than boil. If you find that, you can make a traditional tabbouleh recipe with soaked bulgur.

Bulgur - also riffoth and burghul - is produced from cracked parboiled groats of durum wheat and other wheat species.

If you don't have bulgur, you can make a less authentic but delicious tabouli recipe with quinoa, buckwheat, millet, couscous, amaranth, and farro.

Mint is optional. We add finely chopped fresh mint leaves. Generally, there are no other herbs in tabouli except parsley and mint.

We recommend using extra virgin olive oil. It has a fruitier, nuttier, and more pleasant flavor than regular olive oil.

We use sea salt or kosher salt and freshly ground black pepper.

Lettuce is optional. In some variations, you'll see chopped lettuce added to the other ingredients. In other variations, lettuce is used as a vessel to serve and eat the tabouli.

We like to pick some small lettuce leaves and stuff them with tabbouleh so one can grab the leaf and eat it.

Other Ingredients (not authentic)

Other ingredients not included in the traditional tabbouleh recipe but that go well with it are cucumber, cherry tomatoes, crushed or minced garlic clove, feta cheese, olives, and other grains, quinoa, or cauliflower rice instead of the bulgur.

Boil bulgur wheat in water as per package instructions, drain and let cool down for 10 minutes

Alternatively, you can soak it. Put it in a bowl, cover with boiling water and leave to soak for 20 to 30 minutes. When the water is absorbed and the grains are tender, fluff it up with a fork.

Note: soaking the bulgur is the more authentic method when making tabbouleh and will give you a chewier texture.

Finely chop the tomatoes into about ⅕-Inch pieces with a sharp chef's knife or a serrated knife. Add them to a large mixing bowl.

Tip: if the tomatoes are watery, let them drain in a fine mesh strainer for a few minutes while you chop the parsley.

Tip: use a sharp knife for best results. Dull knives mash the parsley leaves, making them wet and clumpy.

Finely chop the scallions, only the white and light green part. Add them to the same bowl.

In the same bowl, you should have the parsley, mint, tomatoes, scallions, salt, pepper, boiled or soaked bulgur, olive oil, and lemon juice.

Mix well with a spoon, taste, and adjust for salt and lemon juice before serving cold or at room temperature.

Tabouleh should be served cold or at room temperature. You can add lemon wedges on the side for people to squeeze on if you like. We don't recommend serving tabbouleh warm or hot.

Appetizer (mezze): the best way to serve tabbouleh is as an appetizer on a large mixed platter with other delicious Middle-Eastern and Mediterranean dishes.

If you are wondering what to serve with tabbouleh, then try it with:

Side dish: you can also serve this traditional tabbouleh recipe as a side dish with most mains. We like to serve it in lettuce leaves.

Quinoa is an excellent alternative to bulgur, especially if you are looking for a gluten-free tabbouleh recipe.

Its taste and texture match the parsley, tomato, and other ingredients in this tabouli salad.

Lentil tabbouleh is a delicious alternative to bulgur tabbouleh, a classic Levantine salad beloved worldwide for its flavor and freshness.

This recipe is easy to make and you can serve it as a starter or as a side dish with Mediterranean or Middle-Eastern dishes such as hummus and eggplant dip.

Check out our lentil tabbouleh recipe.

You can make tabbouleh the day before; however, we recommend adding the seasoning ingredients (salt, pepper, olive oil, and lemon juice) before serving the salad.

Store leftovers in an airtight container in the fridge for two days. The parsley in the salad does not store well, and it will turn brown due to oxidation and the acidity of the lemon juice.

We do not recommend freezing tabouli salad.

What is tabbouleh made of?

What is the difference between tabbouleh and tabouli?

There is no difference between tabbouleh and tabouli; it's just a different way of spelling it.

What can I use instead of bulgur for tabbouleh?

Traditionally semolina is used instead of bulgur. However, you can also use other grains or pseudo-grains such as quinoa, buckwheat, amaranth, couscous, and millet.

Where does tabouli salad come from?

Tabouli salad comes from Lebanon and Syria and is widespread throughout the Middle East.

Other Middle-Eastern and Mediterranean recipes that are similar to tabbouleh are:

For other tasty salads, check out our: 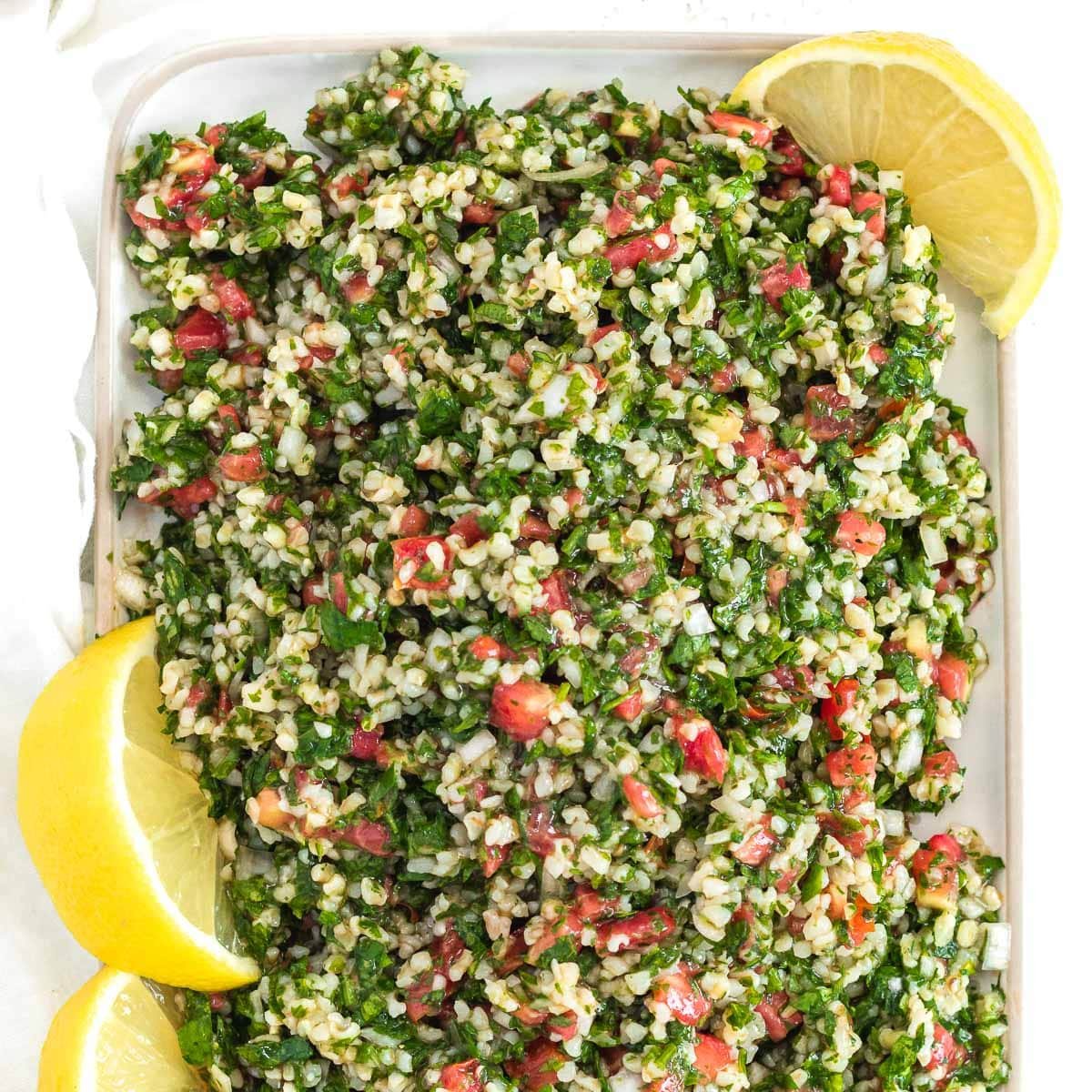 Author: Nico
Tabbouleh - also spelled tabouli - is a tasty and refreshing Levantine parsley and tomato salad. Make it with simple ingredients such as bulgur, lemon juice, scallions, and olive oil.Serve tabouli as a starter on a platter with other Middle Eastern foods, as a side dish, or make it ahead and bring it to picnics and potlucks.
Print Recipe Pin Recipe Share Recipe
5 from 1 vote
Prep Time 20 mins
Cook Time 10 mins
Total Time 30 mins
Course Appetizer, Side dish
Cuisine Lebanese
Servings 4 - 6 people
Calories 137 kcal

SERVING SUGGESTIONS Appetizer (mezze): the best way to serve tabbouleh is as an appetizer on a large mixed platter with other delicious Middle-Eastern and Mediterranean dishes. If you are wondering what to serve with tabbouleh, then try it with: Nutrition information is for one large portion out of four. TIPS If the tomatoes are watery, let them drain in a fine mesh strainer for a few minutes while you chop the parsley. Use a sharp knife for chopping the parsley. Dull knives mash the parsley leaves, making them wet and clumpy.