These vegan stuffed bell peppers are easy to make, tasty, and fulfilling. You can fill them with your favorite grain and legumes, we show you several combinations below. While there's no meat or cheese, these stuffed pepper are packed with protein and flavor.

What are vegan stuffed bell peppers?

First, stuffed bell peppers are a very popular dish in most Mediterranean countries, from Italy to Turkey, from Spain to the coasts of North Africa.

In those countries, bell peppers of any color are generally stuffed with rice and some kind of meat, and in some cases, they are also made vegetarian.

While I get my inspiration for this recipe from the stuffed peppers that I ate while growing up in Italy, our recipe is 100% vegan, and so without meat or cheese.

If you're curious about other stuffed recipes, check out our vegetarian zucchini boats.

We combine grains with legumes to make a nutritious and fulfilling meal and then add some vegan ricotta cheese and some unsweetened soy yogurt on top to add some cheese-like texture and freshness to this dish.

Also, we tried to keep this recipe as simple as possible and with easy-to-find ingredients. We tested different grains and legumes and they all taste delicious!

You can easily make a meal out of these peppers, simply take your pick at these top recipes to eat with stuffed peppers.

In all cases, you will only need to first pre-cook the grain on a pan (rice, quinoa, buckwheat, millet or other) for 10 minutes, and then bake those beauties for 40 minutes in the oven.

Ps. These vegan stuffed bell peppers are also delicious when eaten cold, or preheated. So they are perfect for meal prep!

For the stuffed peppers

You can top these peppers with your favourite vegan topping, like for example vegan melted cheese, vegan parmesan, or vegan cream cheese. We like to use:

How to make vegan stuffed peppers

Let's start with the filling. In a pan with two tablespoons of oil, fry the chopped onion on medium heat for 1 minute. When the onion is translucent add the rice and the red lentils and fry for another minute.

Cook on medium to low heat for about 8 to 10 minutes. Add the remaining water when the pan dries up. You should not cook the rice completely, it should still be a little hard.

While the rice and lentils cook, you could prepare the bell peppers to save some time. Just make sure to stir the rice occasionally to prevent it from sticking.

Turn the heat off, add the chopped parsley, stir and set aside.

You can do this while the filling cooks. Preheat the oven to 360F or 180C. Wash and cut the peppers in half. You can cut them on the short side, or on the long side, like we did. If your peppers are quite big, like ours, then cutting them on the longs side is better.

Remove the seeds and the white flesh. Add a pinch of salt in the peppers, then stuff them with the filling and place them on a sheet pan.

Bake in the oven at 360F or 180C for 40 minutes. Take out of the oven and let cool down for 10 minutes before putting them on a serving platter.

Taste the filling before stuffing the peppers: we do this for two reasons: 1) to adjust for salt, 2) to check that the rice and the lentils are not overcooked. Try to not overcook the filling by tasting it around the 8-minute mark.

Can I use green peppers instead?
Yes, you can use green, orange or yellow, they all work here. Red bell peppers are sweeter and are the richest in nutrients.

That's because they stay on the vine the longest and so they have time to develop more flavor and a richer nutritional profile. For example, did you know that they are packed with vitamin A, potassium and fiber? They also have about 3 times more vitamin C than orange.

Mix it up: change up your grains and your legumes. We tested rice and red lentils, rice + beans + corn, millet + tempeh + chickpea, buckwheat + chickpea. Follow the exact same cooking instructions. From a nutritional standpoint, try to always use both a grain and a legume in your filling.

Use your favorite grain: rice is only one option. You can replace it with most grains. Just keep in mind that if you use whole grains (like brown rice, barley, or oats) you'll need to cook the filling in the pan for more than just 10 minutes.

Can I make stuffed bell peppers in advance?

Yes, you can make stuffed peppers in advance. They are perfect for meal prep because their flavour is even better if you let them cool down completely. You can make the up to three days in advance, then store them in the refrigerator or freeze them.

Yes. These vegan stuffed bell peppers are full of fibre and vitamins, especially C-vitamin. They are also packed with plant-based protein from the grains and legumes. This is a whole-food plant-based recipe that is definitely good for you.

Why do you cook the rice first?

We cook the rice first for two reasons. 1) To speed up baking, 2) to develop flavour. In Italian cooking, building a flavour base for every dish is very important.

Can I stuff bell peppers with wild rice or wholegrain rice?

Yes, however you need to adjust the cooking time. With whole grain rice for example you'd need to almost fully cook the rice in the pan first, or else it won't cook when in the peppers.

In the refrigerator
Our vegan stuffed bell peppers are the perfect food for meal prep as they can be stored in the refrigerator for up to 3 days. Their flavour will be even richer the day after you cooked them.

When you reheat them, make sure you only reheat the peppers that you are going to eat.

Can you freeze stuffed bell peppers?
Yes, these vegan stuffed bell peppers can be frozen without any problem. We recommend freezing them once cooked, but let them cool down completely before doing so. If you have a freezer-safe pot and a large enough freezer, then just put a lid on and freeze.

Alternatively you can place each pepper into single freezer bags. That's the easiest way to defrost them individually.

To thaw, just place in the oven and bake until completely thawed. It shouldn't take more than 15 - 20 minutes.

We tested all these variations and they all take the same time to cook and follow the same instructions as described in this article.

For other delicious vegan Italian dishes, check out our: 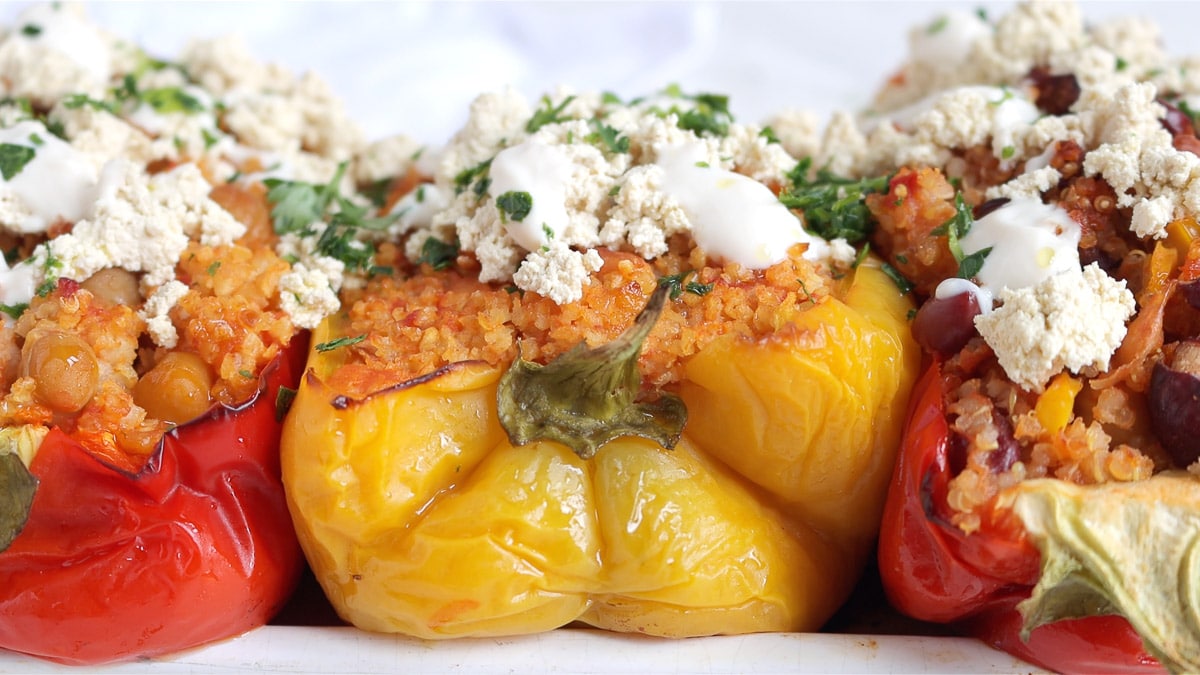 Topping suggestions (you can use other toppings of your choice)

Depending on the size of the peppers you might need 4 to 6 of them. If they are big, usually one portion would be half bell pepper per person. However, if you serve them as a main, some people might eat a full pepper.