For other delicious vegan Italian appetizers or salads, check out our:

When you cook grains like barley, oats, millet, buckwheat, rice, and also pasta, the rule of thumb is that you salt the boiling water with a small handful of coarse sea salt. This will add flavour to the grain and you'll need less dressing later on.

Cool down the barley quickly

Barley is best eaten al dente, with a nice bite and chew to it. To achieve this you want to cool down the barley as soon as you drain it. To do that, avoid putting it under cold running water. That will remove a lot of the flavour and texture.

Instead, place it in a very cold bowl that you previously refrigerated and add the cold juice of one lemon in it. Also, stir it often when in the bowl to allow the hot steam to escape.

Is barley good for health?

Yes. Barley is a whole ancient grain cultivated for over 10000 years. Eating more whole grains and vegetables is the number one recommendation in the scientific community to live a longer and healthier life.

Barley will not only make you strong and fit, but thanks to its dietary fibre content it will help reduce inflammation in your body.

How long will you boil barley?

Being a whole grain, barley takes about 45 minutes to boil. To be sure, check the package instructions, and also taste the barley to make sure you won't overcook it.

Can you use barley for risotto?

Yes. You can make "orzotto" with barley. Orzo means barley in italian, and sometimes, though not often, the Italians make risotto with barley, resulting in a dish called orzotto. It will take longer to make orzotto as the barley requires more time to cook.

You can store your vegan Italian barley salad in an airtight container in the fridge for up to 3 days. Barley salad is best eaten cold, so no need to reheat it when you take it out of the fridge.

To make the flavours come out again, take it out of the refrigerator 30 minutes before eating it. 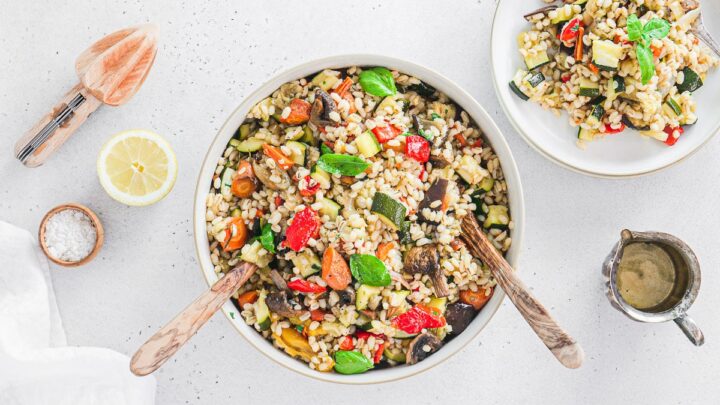 Did you make this recipe at home? Let us know in the comments below, or take a picture and tag us on Instagram @italiaplantbased.

Ciao, I am Chef Nico, recipe developer and instructor here at The Plant-Based School, a project with the purpose to make cooking with plant-based ingredients easy and accessible to everyone.

Omnivores, paleo, vegetarians, and vegans, you are ALL WELCOME to this community.