Roasted bell peppers are a delicious recipe that can be served as an antipasto, a side dish, or can be used as a base for many other recipes like salads and pasta.

In this recipe, we show you the easiest and fastest method to roast, peel, and marinate your bell peppers the Italian way!

We think that roasting your bell peppers in the oven is the simple, cleanest, and healthiest way to make some juicy, delicious, C-Vitamin-loaded peppers.

We roast peppers to improve their flavor, maximize the absorption of certain nutrients like A vitamin, and make them more digestible. Red peppers are more sweet and palatable when roasted, but you can also roast green, orange, and yellow ones.

For other delicious vegan Italian appetizers and salads, check out our:

We recommend using a baking tray with a rim as the peppers might release liquid while cooking. You can use parchment paper or a silicone baking mat to line the baking tray. Also get a glass, metal, or porcelain bowl at hand and a lid to cover the bowl.

How to roast peppers

You can place your peppers in direct contact with your gas stove, fire, grill or directly on a hot pan. However, these methods are a lot messier and require much more attention on your side than baking them. You need to keep turning and flipping your peppers all the time or else they'll burn fast. Also, peeling them will be a lot harder.

In Italy, we generally bake bell peppers in a rimmed baking tray in the oven at the max temperature and let them cook for about 30 to 40 minutes.

Then let them cool down in a bowl, covered, for about 20 minutes. At this point peeling them will be very easy. All you are left to do is to season them with your favorite homemade marinade.

Cooking your bell peppers at a high temperature until they are very soft (30 to 45 minutes) and their skin is charred is very important for two reasons. 1) they will gain the roasted flavor. 2) it will be easier to remove the peel.

Give it enough time to cool down before peeling

Putting your peppers in a bowl covered with a lid or a plate when they are straight out of the oven is very important. The heat of the peppers will create steam that will separate the skin from the flesh of the peppers.

Plastic is not necessary

Some recipes suggest putting your roasted bell peppers in a plastic bag while still hot. We do NOT recommend that for two reasons. 1) there is already so much plastic floating around the world that it is irresponsible to use plastic when not really necessary. 2) The heat of the peppers will most likely weaken the polymers of the plastic (even if the bags manufacturers say the plastic bag is suitable to take the heat). This means you'll end up eating plastic. We prefer to keep plastic out of our kitchen if we can.

Rinsing with water or not?

To keep the maximum roasted flavor avoid rinsing your peppers under running water after they are roasted. You can just scrap the peel and the seeds with a knife or with your hands. However, we still recommend quickly dipping your peppers in water to make the process of removing skin and seeds easier, and to obtain a cleaner final dish.

We recommend crushing the garlic rather than adding minced or sliced garlic to the marinade. Crushed garlic will add plenty of flavor to the peppers, but you can more easily discard it if you don't like eating it.

Marinating is such an important step. Let your peppers stay in the marinade for at least half an hour before serving. You can even prepare your peppers one day in advance, they will taste divine.

If you store your Italian roasted peppers in the refrigerator then make sure to take them out and let them be at room temperature for about 30 minutes before serving. Like with tomatoes, serve peppers at room temperature as the cold will reduce their flavor.

Peppers are one of the healthiest vegetables around. They are rich in A, B6, and C vitamins - much more than oranges or carrots. Roasting the peppers will still give you plenty of C vitamin and will increase the absorption of the A vitamin.

We recommend oven-roasted peppers because cooking in the oven is healthier than cooking directly on an open flame or grill. This is because open flame and grill can create more burned compounds like benzopyrene (the stuff you find in cigarette smoke) that will end up in your food - and that's not healthy.

Should you peel roasted peppers?

Yes, we recommend peeling them as they'll be yummier and easier to digest. Also, the skin will often be burnt, so you should remove it.

What is the difference between red peppers and green peppers?

Red, green, yellow, and orange bell peppers are all the same type of pepper but just at different stages of ripeness. Green peppers are unripe, and red are fully ripe, with yellow and orange in between the two.

As the peppers age and ripen their taste, their health benefits change too. Red peppers are the sweetest and the richest in nutrition as they hang on the vine the longest.

Green peppers are harvested earlier before they have a chance to turn yellow, orange, and then red. Compared to green bell peppers, the red ones have almost 11 times more beta-carotene and 1.5 times more vitamin C.

Italian style marinade: while we prefer our peppers with a basil marinade as described in this recipe, the most common way to marinate roasted peppers in Italy is with flat-leave parsley marinate. Mix together 6 tablespoon extra virgin olive oil, 3 tablespoon white vinegar, 1 tablespoon capers, 1 handful of chopped parsley, 2 crushed garlic cloves, salt and pepper to taste.

You can store fully seasoned roasted bell peppers in the refrigerator for about 4 to 5 days. Put the in a bowl and cover them with some extra olive oil. Let them out of the fridge at room temperature for about 30 minutes before serving them.

You can also freeze roasted bell peppers, however in this case we recommend not marinating the peppers as the marinade doesn't freeze super well. All you need to do is to roast, peel and seed the peppers, then place them in a bowl or container suitable for freezing, write the date on the container, and freeze for up to three months.

To defrost them, take them out of the freezer, then let them defrost slowly in the refrigerator (not at room temperature as this will foster bacterial growth on the surface of the peppers). Once completely thawed, you can proceed with the marinade as described in the recipe above.

If you love roasted peppers, or you're trying to increase your veggie intake a little, take a look at these healthy sides:

For many more side dishes ideas, check out our sides category page. 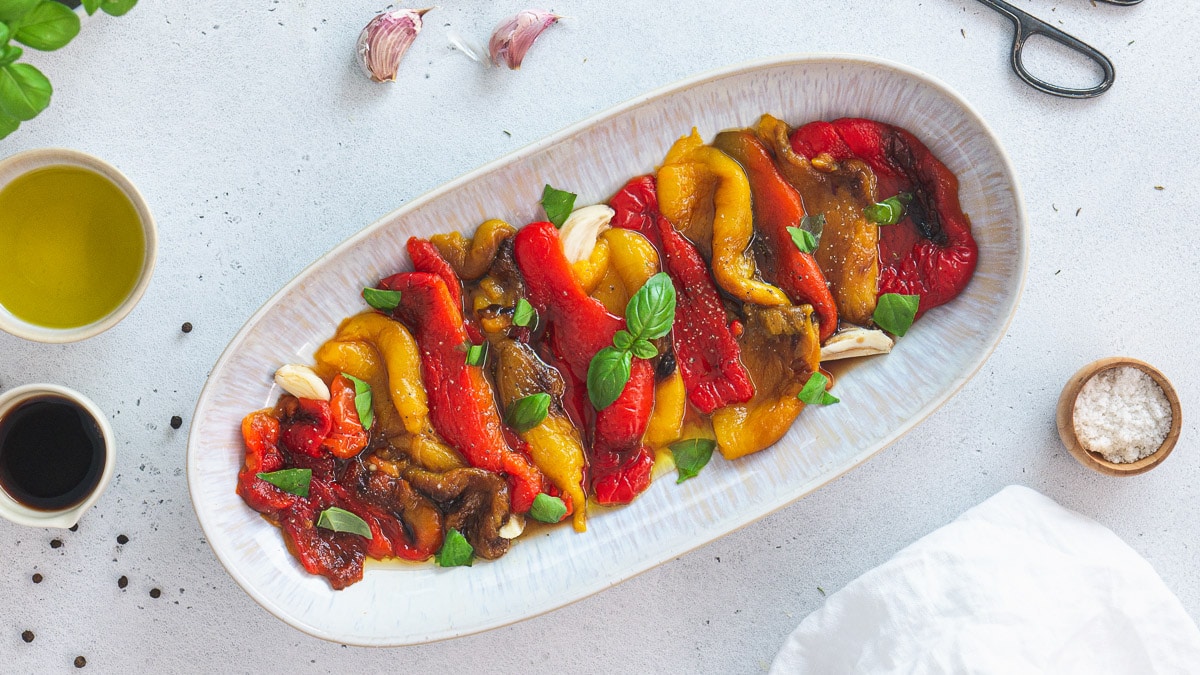 How to roast bell peppers

Author: Nico
Roasted bell peppers are a delicious recipe that can be served as antipasto, side dish, or can be used as a base for many other recipes such as delicious orzo salad with roasted vegetables, or a pasta with a bell pepper cream.
Print Recipe Pin Recipe Share Recipe
5 from 5 votes
Prep Time 30 mins
Cook Time 30 mins
Total Time 1 hr
Course Side dish, Starter
Cuisine Italian
Servings 4 people
Calories 205 kcal