This Italian vegan mushroom scaloppini is meaty, creamy, cozy and made with our healthy vegan meat cutlets to get to a flavour and texture that is as delicious as the one of real meat.

We follow the original Italian recipe for "scaloppine ai funghi" to get to a final fake meat dish that will taste like Italy, and will please the everyone at your table. We hope to inspire you and show you that vegan food can be as tasty as non vegan food.

Vegan meat cutlets: you will need to make these before hand to cook this Italian vegan mushroom scaloppini. Don't worry, the procedure is easy, and you can follow our step-by-step instructions here --> "How to make vegan meat cutlets". Just make sure you do it a day or so in advance as the vegan cutlets need some time in the refrigerator before you can cook them.

Vegetable broth: use the broth left over from cooking the cutlets. It can be replaced with water.

White wine: to deglaze the pan when hot, it adds acidity to the fake meat and will make this dish next level.

Brown mushrooms: we use common brown champignon mushrooms as those are the once most commonly used in the original scaloppine recipe from Italy.

Seasoning: we use fresh flat-leaf parsley, garlic, sea salt and pepper for this recipe, as used in Italy in the original recipe of "Scaloppine ai funghi".

Flour: we call for all purpose flour to coat the vegan meat. You can use cake flour, rice flour or corn starch if you want a lighter coating.

Olive oil: to cook the scaloppini and the mushrooms. Can be extra virgin but this is not necessary. 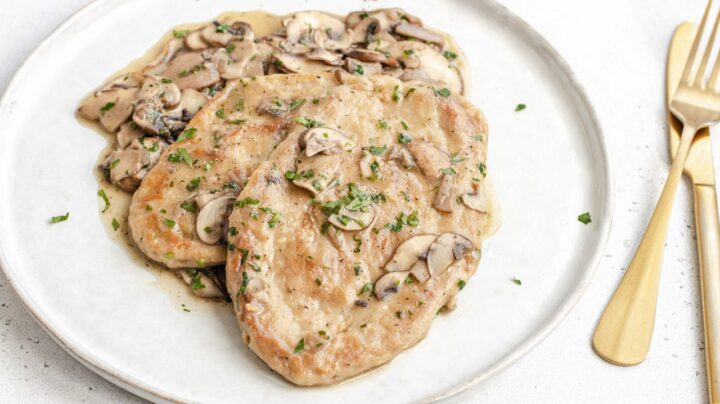 Author: Nico
This Italian vegan mushroom scaloppini is meaty, creamy, cozy and made with our healthy vegan meat cutlets to get to a flavour and texture that is as delicious as the one of real meat. We follow the original Italian recipe for "scaloppine ai funghi" to get to a final fake meat dish that will taste like Italy, and will please the everyone at your table. We hope to inspire you and show you that vegan food can be as tasty as non vegan food.
Print Recipe Pin Recipe
5 from 1 vote
Prep Time 15 mins
Cook Time 20 mins
Course Main Course
Cuisine Italian
Servings 4 people
Calories 346 kcal

NOTE: Here's is our full recipe for Homemade Vegan Meat Cutlets. Ideally you should make these cutlets between 1 day to 6 days in advance so that they have enough time to rest and build a good meaty texture. Please take this into account when cooking this recipe.

Deglazing the pan with white wine really helps to build acidity, sweetness and umami in general. Deglazing is very simple and it basically just means to add a cold liquid to a very hot pan. In our case, we add the white wine to the hot pan with the vegan cutlets in it.

Use vegetable broth instead of water to finish cooking these Italian vegan mushroom scaloppini. The broth will add extra flavour to both the meet and the creamy sauce.

Add flour to the sauce

Flour is not only used to coat the scaloppini, but also as a thickening agent of our sauce. When you add the broth to the pan to finish cooking the scaloppini, also add one teaspoon of flour to the pan. With the help of a wooden spoon or small whisk, help the flour dissolve in the broth. This will make the sauce of the scaloppini extra creamy.

The combination of mushrooms, garlic and freshly chopped flat-leave parsley will take you straight to Italy! We recommend using fresh parsley rather than using pre-packaged dry parsley. The thing is, flat-leaf parsley is so widespread in Italy that no-one really uses dried one. So to get closer to real Italian flavours, use fresh parsley.

Scaloppini (scaloppine in Italian) is a thinly sliced cut of meat and is a type of Italian dish that comes in many different varieties and sauces. It consists of thinly sliced meat, most often beef, veal, or chicken, that is coated in wheat flour and sautéed in one of a variety of reduction sauces.

In our vegan scaloppini, we use homemade vegan meat cutlets that we make with vital wheat gluten to reach a texture and flavour as close as possible to the one of veal or chicken.

In Italy, scaloppini are eaten in many different variations. Our favourite is with white wine and mushrooms (like in this blog post) and with lemon juice. Here's the full recipe.

Vegan mushroom scaloppini are best cooked and eaten immediately. You can however store the homemade vegan meat cutlets (before cooking them in the lemon sauce) in a container in their own cooking broth and in the refrigerator for up to 1 week. This is the best way to have a quick dinner almost ready during the week.