This vegan creamy pasta is inspired by the Italian Boscaiola recipe. Mushrooms, peas, and vegan bacon make the base of this luxurious restaurant-y sauce.

It is easy to cook and is ready in less than 30 minutes, perfect for a quick and fulfilling vegan dinner.

"Boscaiola" is a simple dish with Tuscan origins made mostly during autumn when mushrooms are in season.

Probably, the name refers to the earthy and forestry feel you get when eating mushrooms, cream, and sausage or pancetta in one bite. Bosco in Italian means forest.

In our vegan version, we replace the sausage and the pancetta with our homemade vegan bacon. It's easy to make, with tempeh, and it tastes really delicious.

Even if you normally don't like tempeh you'll love it cooked this way.

Cut the tempeh into small dice, like if it were bacon dice.

To a non-stick pan, add 1 to 2 tablespoons of olive oil. Warm up the oil on medium-low heat, then add the tempeh dice.

Season with salt and pepper, then pan-fry on medium-low heat for about 5 minutes, till the tempeh starts to get golden on the outside. Move the tempeh around often.

Add a tablespoon of soy sauce and fry for another minute. Note that tempeh bacon should be quite salty, to recall the flavor of real bacon. Transfer onto a plate and set aside.

At this stage, put the water for the pasta to boil.

Then in the same non-stick pan where you cooked the tempeh, without washing it, add a tablespoon of olive oil and the chopped onion.

Fry for 2 minutes on low heat, adding some water if the onion starts to burn.

In the meantime, chop the mushrooms. I like to chop them quite chunkily. Then add them to the pan with the onion, and season them with salt and pepper.

Let the mushrooms cook on medium-low heat for 8 minutes. At the same time, boil the pasta in salted boiling water.

Now add frozen peas, cooking cream, and half a cup of water, and let cook on low heat for 3 to 4 minutes.

When the pasta is al dente (that is slightly undercooked) add it to the pan. Add plenty of finely chopped parsley and half a cup of pasta cooking water. Stir well but gently.

Now add the tempeh bacon, stir and serve this delicious vegan creamy pasta. If necessary, you can add some more pasta cooking water to make the sauce creamier.

Can I make this recipe oil-free?

Yes. Replace the tempeh bacon with smoked tofu, adding it raw without frying it. Fry the onion with water, rather than oil.

I am on a low-sodium diet, can I reduce the salt?

Sure, reduce the salt as much as you need to. Here too, I would use smoked tofu rather than tempeh, if you are using less salt.

Which mushrooms are the best?

You can easily use whatever mushrooms you can get. White mushrooms, brown mushrooms, portobello, chanterelle, and porcini are all great options.

If you want to add some extra mushroom flavor, you can add about 0.5 ounces or 15 grams of dry porcini mushrooms.

You just have to soak them in half a cup of water for 10 minutes first, then add them with their soaking water to the pan with the other mushrooms.

This vegan creamy pasta, boscaiola style, is best eaten as soon as it's cooked. If you have some leftovers, store them in a bowl or in an air-tight container in the refrigerator for up to 24 hours.

Reheat the pasta on a pan with a drizzle of olive oil.

It's no secret that we love creamy pasta recipes! It's a complete meal and frankly, one of our favorite choices for an easy dinner. BUT, if you want to increase your veggie intake - we're certainly trying, then check out these vitamin-rich side dishes:

If you love this creamy vegan pasta, try one of these quick and easy pasta recipes: 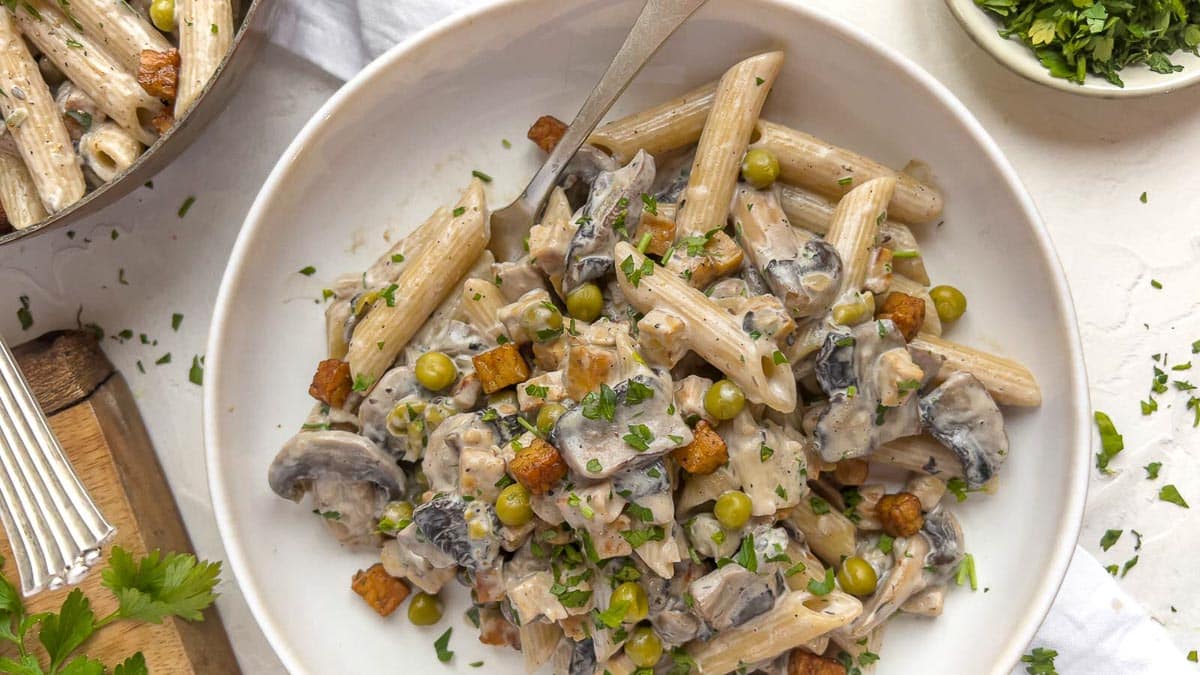