Stuffed bell peppers with rice are hands down one of the best mediterranean culinary traditions. Our vegan version of this best-selling recipe is made with big red bell peppers for a meaty, juicy, sweet, and smokey flavour bomb and seasoned with plenty of fresh dill, parsley and cilantro. You can make them in a pot or roast them in the oven. In either cases, they'll be freaking delicious!

Growing up in Italy, naturally vegan stuffed bell peppers with rice were on the dinner table on a weekly basis. We would get them fresh from the local farmers and, as a kid, I loved them. Many kids these days don't like veggies because we feed them crappy flavourless ones. Cook some of these flavour bombs for them and they will devour them.

These vegan stuffed bell peppers are juicy, rich, packed with taste and just very comforting. So when I saw this recipe on the instagram channel of my colleague "Lady with a fork", I was super inspired to remake this recipe with some delicious red peppers, a ton of fresh herbs, and rice. A sure hit for all eaters.

White rice: we recommend white rice as peppers already contain a ton of fibre and wholegrain rice would just take way too long to cook for this recipe.

Tomatoes: try to use very ripe red vine tomatoes too give max flavour to the rice.

Onion, garlic, tomato paste & paprika: important to give full flavour to the rice.

Extra virgin olive oil: we use it to gently fry onion and garlic and build extra flavour.

Flat leaf parsley, cilantro & dill: these three herbs will add a ton of freshness and flavour to the stuffed peppers.

Vegetable bouillon: we use this to make the vegetable stock and cook the rice with it. Make sure you pick a brand that is preferably organic and doesn't use glutamate.

You'll need either a large pot or a baking tray depending on your cooking method. 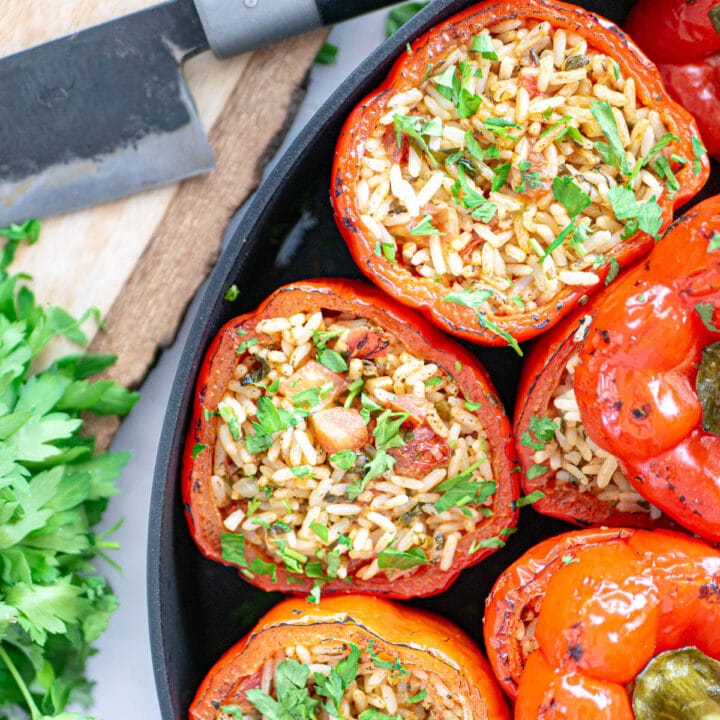 Author: Nico
Stuffed bell peppers with rice are hands down one of the best mediterranean culinary traditions. Our vegan version of this best-selling recipe is made with big red bell peppers for a meaty, juicy, sweet, and smokey flavour bomb and seasoned with plenty of fresh dill, parsley and cilantro. You can make them in a pot or roast them in the oven. In either cases, they'll be freaking delicious!
Print Recipe Pin Recipe
5 from 6 votes
Prep Time 15 mins
Cook Time 45 mins
Total Time 1 hr
Course Main Course
Cuisine Italian
Servings 5 people
Calories 319 kcal

Can I use green peppers instead?
Absolutely. You can use your favourite bell peppers for this recipe. Green, orange or yellow, they all work here. Red peppers are our favourite for three reasons.

First, they are sweeter, but if you prefer a less sweet dish, go for the green ones. Red peppers are also more colourful and I really like food that looks yummy. And finally, red peppers are the richest in nutrients.

Why? That's because they stay on the vine the longest and so they have time to develop more flavour and a richer nutritional profile. For example, did you know that they are packed with vitamin A, potassium and fibre? They also have about 3 times more vitamin C than orange!

I don't like peppers! Can I use other veggies?
Sure you can, but please try at least once. A lot of my friends that don't like bell peppers end up loving this recipe. But if you really don't like them, no worries.

You can use round zucchini (squash), tomatoes and aubergines. They all work great with this recipe. With these veggies though, you need to remove some of their flesh with a spoon to make space for the filling.

You can mince some of their flesh and add it to the rice. We just did this with round zucchini and it turned out crazy good.

How to cook stuffed peppers in the oven?
The process is exactly the same. Just use an oven dish instead of a pot and you are good to go. We tested this in the oven the other day and the result was great.

You will need to add some extra vegetable broth into the peppers half way through the cooking. Cook at 200˚C / 390˚F for 45 minutes. You can also wrap the oven dish in foil to speed things up and keep the peppers moist.

Overall the result is very similar to cooking them in a pot. What I like about the pot method is that the peppers stay more moist. On the other hand, baking makes the peppers roasted on top, and that's nice too.

Can I use dry herbs instead of fresh ones?
Mmm, you could use dry herbs, but we would not recommend it. Dry herbs are much more intense in flavour so you would need to use less of them, just a pinch or two.

The colour and the flavour will not be as fresh and fragrant with dry herbs. In general, if possible I would always prefer fresh herbs vs dry ones. If you don't find all of the herbs fresh, then try at least to have one of them fresh.

How do you make your peppers roasted on top?
Roasting the peppers on top makes them look prettier, but also, it builds a smokey flavour that goes really well with the peppers. To do that, you can either cook you peppers in the oven.

Or, you could use a blow torch to just slightly burn the top. But don't burn them too much. When food is burnt, it produces very unhealthy substances called polycyclic aromatic hydrocarbons (PAHs) that you definitely don't wanna eat.

Do you need to cook the rice first?

You don't need to fully cook the rice first, however, it's good practice to cook the rice with the other ingredients for a few minutes to develop flavour. In Italian cooking, building a flavour base for every dish is very important.

By following the instructions on this recipe, you will first build a strong flavour base for the rice with the olive oil, the tomatoes, the herbs and spices, that will make these peppers extra tasty.

Can I stuff bell peppers with wild rice or wholegrain rice?

Yes, however you need to adjust the cooking time. With whole grain rice for example you'd need to almost fully cook the rice in the pan first, or else it won't cook when in the peppers. 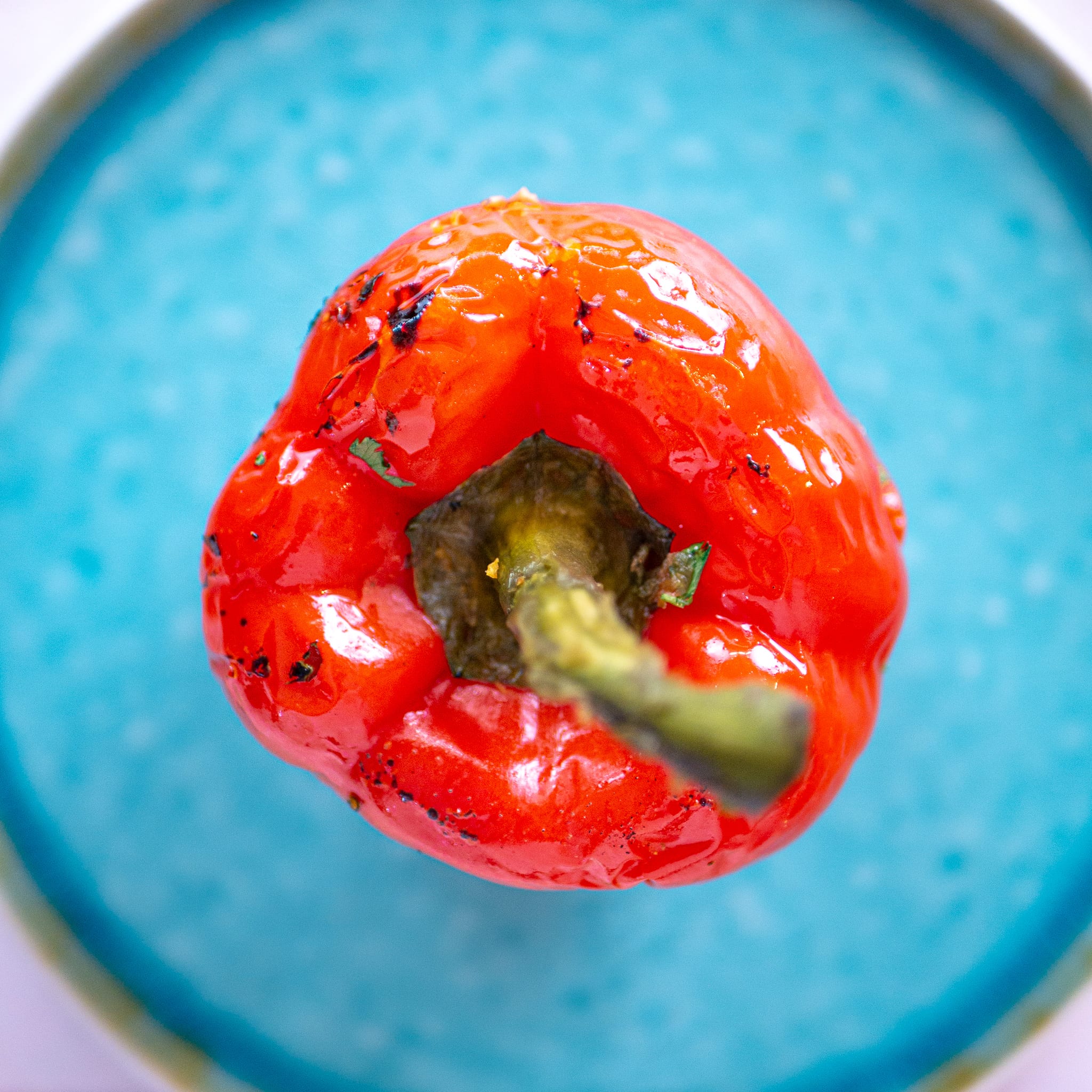 Can I stuff bell peppers with quinoa?

Yes you can. Look at the cooking time on your quinoa package. If it says cooking time between 10 to 15 minutes, then you can follow this exact recipe. If it has a longer cooking time then you must precook the quinoa on the pan for longer, just like for wholegrain rice.

Can I stuff bell peppers with tofu?

Yes. In this case mince the tofu into little pieces and mix it with the rice at the beginning so that it gains some flavour. You'll need to reduce the amount of rice if you add tofu.

Can I stuff bell peppers with other grains?

Yes. These vegan stuffed bell peppers can be filled with any type of grain like barely, whole grain oats, amaranth, etc...but then you would need to adjust the cooking time. With whole grains for example you'd need to almost fully cook the grains in the pan first, or else they won't cook when in the peppers.

How do I add some extra protein?

If you want to pack some extra protein, then add some red lentils in with the rice. Red lentils cook as fast as rice but they add a ton of extra flavour and nutrition! We love that combo and it immediately became our favourite filling.

When you reheat them, make sure you only reheat the peppers that you are going to eat. You should not reheat the same peppers multiple times.

Alternatively you can place each pepper into single freezer bags. That's the easiest way to defrost them individually.

To defrost, just place in the oven and bake until completely thawed. It shouldn't take more than 15 - 20 minutes.