Vegan castagnole are sweet deep-fried or oven baked donut holes or dough balls, that can be filled with vegan custard or coated with sugar. They are sweet, crunchy, aromatic, and easy to make. In Italy we eat castagnole as a traditional Italian dessert during carnival season. Some Italians call them Favette, others call them Strufoli.

We usually prepare them in 4 different ways: oven baked, deep-fried, filled with custard, and drizzled with alchermes (a red liqueur). Castagnole are easy to make, with simple ingredients, crisp on the outside and soft on the inside.

In this post we show you how to do all of them and without eggs, milk or butter. Our vegan castagnole are as tasty and delicious as the original Italian castagnole recipe. 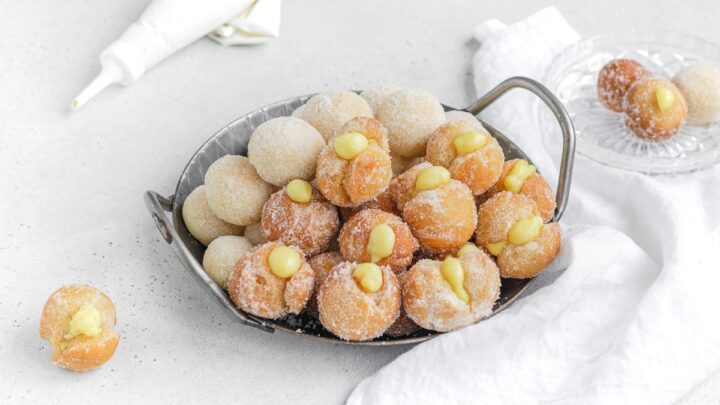 NOTE: in some regions of Italy they use anise liqueur or rum instead of white wine. If you do that, you don't need to add the anise powder.

Where are castagnole from?

Castagnole are typical Italian dessert that date back hundreds of years. They are eaten during carnival season in Italy.

Can I oven-bake castagnole?

Yes! Oven-baked castagnole are as authentic and traditional as deep-fried ones and appear in Italian cook books that date back to the 18th century.

What does castagnole mean?

Castagnola means little chestnut, due to their small round shape.

Deep fried castagnole don't store very well and they are best eaten on the same day. You can store oven-baked ones for up to 3 days in a reusable plastic bag. You can also freeze the dough already shaped, but before cooking it.

My favourite version of sweet dough balls is the one made in Umbria, where this dessert is actually called Strufoli. In Umbria strufoli are puffier than in other regions and they are served either drizzled with honey (use agave syrup as a vegan substitute) and orange zest, or with Alchermes, a red liqueur (make sure your alchermes is made with E124 colouring and not E120 because E120 is not vegan).

These are puffy castagnole that are stuffed with our vegan custard. The most important thing when making this version is that they become puffy when you cook them, or else it will be impossible to filled them with custard. See all our tips above to make this variation.

Oven-baked castagnole are the healthiest and easiest of all castagnole. If you cook them right they are still delicious. The secret is to not overcook them. See all our tips above. You can also dip them in Alchermes or just dip them in sugar.

Frappe, bugie or chiacchiere are another typical Italian carnival dish that we serve in Italy with castagnole during carnival season. We make them with a similar dough, then we flatten them very thinly and fry them. They are crispy, light and just delicious!

Struffoli (around the Naples region)

Struffoli also known as Honey Balls is a Neapolitan dish made of deep fried balls of sweet dough. The dough is similar to the one used in chiacchiere or in castagnole, but shaped into small balls, deep-fried, and coated in honey. A very similar variation of this dish is called cicerchiata in the regions of Umbria and Marche.

Will you be cooking castagnole at home? Let us know in the comments below!